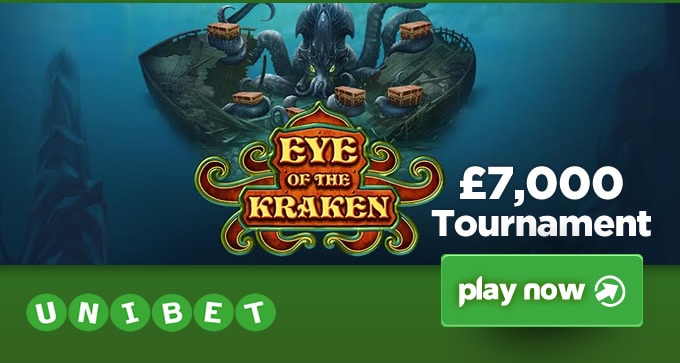 Unibet Casino have released the upcoming Play ‘N Go slot game, Eye of the Kraken, 2 weeks early and are celebrating with a £7,000 tournament.

Eye of the Kraken will be released by Play ‘N Go to the general public so to speak in a couple of weeks’ time but is available at Unibet (and Maria Casino) exclusively early. The game can be played on mobile and tablet devices as well as desktop and is a 3×3 grid with 9 reels and 8 paylines.

Playable from 20p a spin, you are taken to the depths of the sea in this latest adventure. Based on a deadly creature which looks like an octopus, there’s a few features to benefit from. Look out for the wild symbol as these become Wild Kraken Tentacles and slither on to the reels to replace one or more symbols with wilds.

You have the Conquer the Kraken bonus feature which is triggered when you collect 50 torpedoes – here you battle the Kraken by targetting any 3 tentacles to reclaim valuable treasure (cash prizes). You can win up to 500 times your stake here.

There is also the Dive Mode feature which is played when you get 5 diving helmets – you will be rewarded with 9 free spins. Look out for the treasure chest symbols as these give you up to 150 times your stake for 9. The sapphire-blue eye of the Kraken is the wild with 3 rewarding you with 20 times your stake. For more details and to play for free, check out the Eye of the Kraken slot review.

Unibet are running a £7,000 tournament with the top 100 spinners being rewarded. The promotion runs until Sunday the 27th of September so there’s plenty of time to participate. All you need to do is play Eye of the Kraken by wagering more than £50 in total. There are cash prizes to be won as well as an iPad Mini 16GB. Here are the prizes:

The winner of the iPad Mini will be drawn on Monday the 28th of September and contacted the same day. The more you play, the higher your chances of winning a cash prize – you need to play at 50p a spin or more to enter though. You never know, you might win an iPad Mini too!