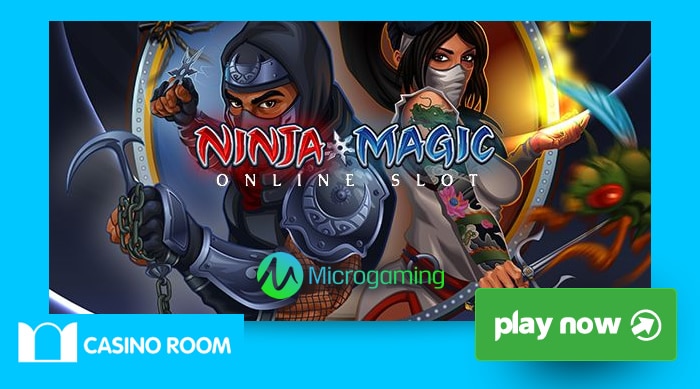 Microgaming has released the Ninja Magic video slot and its available to play at the impressive CasinoRoom – find out more below.

Alongside the volatile Pretty Kitty, Microgaming released Ninja Magic – the 5 reel, 40 payline video slot may not be as high variance but offers plenty of big wins if your luck is in. Available to play on desktop, mobile and tablet devices from just 40p per spin, it has an obvious martial arts theme.

With a Chinese feel, look out for the Ninja Magic wild symbol as it doubles your outcome when forming part of a winning combination. However, this game is all about the Ninja Magic Bonus feature where you will get up to 3 free spins with a 3x multiplier initially.

You are then taken to place where you come across weird giant bugs – you pick bugs to increase the number of free spins and multiplier with up to 40 free spins with an 8x multiplier on offer. With up to 300 times your stake to be won on every single free spin, there’s plenty of potential to win big. For a full rundown, read the Ninja Magic video slot review.

You can play Ninja Magic at CasinoRoom – you will also find Pretty Kitty which was released at the same time. They offer you Microgaming and Net Entertainment video slots basically. UK licensed, they offer very fast cashouts including at weekends.

As a new player, you will receive 20 free spins without having to deposit on NetEnt’s Starburst. Then there’s a massive 100% first deposit bonus offer up to £500 (i.e. deposit £500, get £500 free). That’s not all though – you will get 20 Starburst free spins for 9 consecutive days (totalling 180) once you’ve made your first deposit.