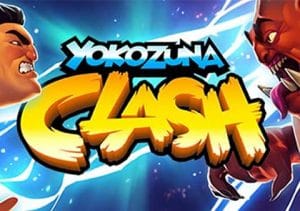 WHERE TO PLAY Yokozuna Clash SLOT

Join the biggest beasts of the martial arts world in Yokozuna Clash, a sumo-themed video slot from Yggdrasil Gaming. Land a 5 of a kind winner and you’ll see extra matching symbol added to the cluster. Sumo wrestlers can award extra wilds and multipliers. There’s also a free spins round where more wilds and multipliers can strike. Play on your computer, tablet or mobile devices from between 25p and £125 per spin.

Set against a traditional sumo venue backdrop, you’ll see playing card suit symbols as well as dragon and animal symbols spinning around the reels. Top of the payers is the phoenix which gets you 12 times your total bet if you land 5 on a payline.

On any base game spin you could see Riki and Haru, the blue and green wrestlers, appear. The former can add 1 or 2 wilds on reels 2, 3 or 4 while the latter can boost a payout with a 2x or 3x multiplier. Supplementing the base game action are a couple of extras.

Sumo Clash feature – land a 5-of-a-kind win and 2 or 3 extra matching symbols are added, helping to create an even bigger winning combination.

Tournament Free Spins feature – the main feature is activated by landing 2 Free Spins symbols on the same spin. The precise number of free spins awarded changes each time and depends on how Riku or Haru do in their contest against O’Connor or Daisuke (the Scottish and Flower Sumos).

After a victory, your wrestler will then take on Yokozuna. The process is then repeated with wilds and multipliers in play depending on the action. If your fighter wins the contest against Yokozuna, your total free spins win is doubled.

Yokozuna Clash is a typically well-designed Yggdrasil Gaming video slot. The sound and visuals are excellent as usual. The gameplay offers something a bit different, especially the Tournament Free Spins feature. That can be really hit and miss. If the contest goes in your favour, the wilds and multipliers can quickly get the coins flowing with payouts of 3,440 times your bet available on each free spin.

Sumo has drifted off terrestrial TV screens and become niche viewing. Even if you’re not normally a fan, the extras on offer from the bonus round make Yokozuna Clash a game to consider. I would also try Yggdrasil Gaming’s Hanzo’s Dojo and Super Sumo from Fantasma Games/Microgaming if you like the theme.