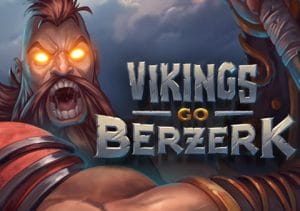 Vikings Go Berzerk is the sequel to the hugely popular Vikings Go Wild video slot from Scandi developer Yggdrasil Gaming. Featuring the same blend of classy visuals and impressive features as the original, this 5 reel, 25 payline game comes with plenty of extras including instant win bonuses of up to 400 times your stake and free spins with sticky wilds and wild reels. Play from between 25p and £125 per spin.

The design in this second outing for the Viking raiders is once again superb. The setting is a longboat – on the reels are 4 coins, a motley looking crew of Viking warriors and a wild which substitutes for everything bar the free spin, treasure chest and golden treasure chest symbols. The Vikings went wild on their maiden voyage and there’s even more adventurous offering available on this second trip:

Treasure Chest feature – the treasure chest symbol only appears on reel 4 but when it lands, can deliver some fine booty in the form of 7, 14 or 21 free spins or a coin payout of between 2 and 40 times your stake.

Golden Treasure Chest feature – better still is the golden treasure chest. When this hits on reel 5, it offers even bigger prizes. Up for grabs once again 7, 14 or 21 free spins, an increased instant win of between 10 and 400 times your stake, a 25% rage boost or the Ragnarök Free Spin feature (we’ll come to the latter 2 extras shortly).

Vikings Rage feature – every time a Viking symbol is part of a winner in the base game, it will add to its rage meter. Once they reach boiling point and the meter is full, that Viking will become berzerk. On a free spin, he will win his battle and turn wild.

Free Spins feature – this round can be triggered by landing 3, 4 or 5 scatters anywhere on the reels on the same spin or via the treasure chests. Regardless of how you trigger those 7, 14 or 21 free spins, you’ll be given the chance to add some modifier extras before they start.

Pick to reveal an extra 1, 2 or 3 free spins, a wild, a wild reel, extra treasure chest, extra gold treasure cheats or the Ragnarök Free Spin feature. Any wilds that land during the feature will remain frozen for the duration – winning Vikings will battle sea creature. If they defeat the nautical beast, they too will become wild.

Ragnarök Free Spin feature – trigger this from the golden treasure chest or the free spin picks and all the wilds that land will be berzerk and automatically turn wild.

That may all sound a little complicated but don’t worry – we’re in safe hands with Yggdrasil Gaming. The features become self-explanatory very quickly. The actions come along regularly in both the base game and the bonus features. The overall variance is in the medium range with wins of up to 4,000 times your stake available on each spin.

Yggdrasil Gaming has produced another cracker here. Visual high standards are a given for video slots from this developer and they’ve come up trumps once again. The range of features matches the quality design making Vikings Go Berzerk a fine addition to the Vikings franchise.