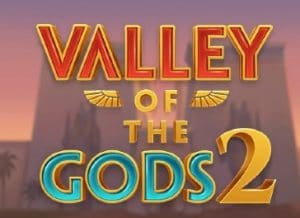 Valley of the Gods 2: Demo

WHERE TO PLAY Valley of the Gods 2 SLOT

Yggdrasil Gaming is inviting players on a second ancient Egyptian trek in the Valley of the Gods 2 slot. This sequel is played using an unusual 6-reel game engine where 16 positions on the reels are blocked. Land a winning combination and you’ll unblock positions as well as get a re-spin. Get on a roll with the re-spins and unlock all symbol positions and you’ll bring multipliers, extra lives and extra wilds that lock in place for the rest of that round of re-spins. You’ll also play with 20,160 ways to win. Superbly designed as usual, find out more in our Valley of the Gods 2 review.

The action in the Valley of the Gods 2 slot begins on a 6 reel machine. The open symbol positions are set up in a 1x2x3x4x5x2 formation. These offer 240 ways to create a winner by landing 3 or more matching symbols on adjoining reels, starting from reel 1.

Bet levels here start at 10p per spin, rising to a maximum of £100 per spin. You can set between 10 and 1,000 autospins as required. To set win and loss limits, you’ll need to adjust via the settings tab rather than the autoplay. You can also set spin speed from here.

The Valley of the Gods 2 RTP is 96.2% which is pretty standard. We found the action to be rather volatile. The hit rate is 17.7% so you’ll land a winning spin about once every 5 spins. The maximum payout is 6,432x your total stake which will come when you fully expand the reel set to offer 20,160 ways to win.

Valley of the Gods 2 Theme – head to ancient Egypt

This recreation of an ancient Egyptian valley is beautifully done. Flanked by ornate pillars and palm trees, the visuals are very nicely done and have Yggdrasil Gaming’s instantly recognisable style. There’s a catchy, Arabian-style soundtrack playing in the background while you spin. It’s an ideal fit for both the theme and the gameplay offered in Valley of the Gods 2.

The reels are made up of lower value A to 9 royal symbols and 4 higher paying Egyptian hieroglyph symbols. You’ll see head-style statues of the jackal god Anubis, the bird god Horus and the crocodile god Sobek. The top standard symbol is the cat god Bastet which pays 2, 4, 10 or 20 x your bet if you land 3, 4, 5 or 6 in combination. The Cleopatra-style queen is the wild. She of course, appears fully stacked during the re-spins.

Valley of the Gods 2 is available to play on tablet and mobile devices as well as desktop and laptop computers. The high-class sound and visuals make it well suited to mobile play. The gameplay is a little unusual but it works well overall.

Valley of the Gods 2 Bonus Features

The gameplay in Valley of the Gods 2 is very different from your common or garden slot. The reel grid is an unusual shape and it’s filled with blockers. Winning combinations award re-spins and open up new reel positions. They can also bring other goodies into play.

Land a winning combination and you’ll receive a couple of rewards in addition to the standard payout. You’ll get a re-spin. You’ll also notice that some of the blocked symbols are now open. This expansion also increases the number of ways you can form a winner. The re-spins keep on coming as long as a new winning combination hits. Fully expanded, the reels are now in a 3x4x5x6x7x8 formation and offer 20,160 ways to win.

Once fully expanded, you’ll activate the Scarab Collections features. Winning symbols can come with special scarabs attached. When they’re part of a winner, they’re collected in a meter. Fill the meters to bring some tasty extras into play:

Spins on the fully unlocked reels start with a 2x multiplier. For every 5 blue scarabs collected in the meter, the multiplier increases by 1x. This multiplier remains in play for the rest of this round of re-spins or gets higher if you collect more scarabs.

The red scatter awards an extra life once you’ve collected 5 of them. If you have a winless re-spin, you’ll use your extra life to continue the round.

It’s the gold scarabs that you’re after here. Once you have amassed 5 of them, 1 reel will turn totally wild. This wild locks in place for any re-spins you have left.

Once you’ve run out of lives, you’ll return to the original reels which are filled with blockers and offer the minimum 240 ways to win. All the multiplier and wild extras are reset too.

With so many slots with the ancient Egyptian theme to choose from already, trying to create something original can be a tricky business. Yggdrasil Gaming has managed that with this slot sequel though. The gameplay here really is different.

It might lack a traditional free spins feature but the re-spins and the extra wilds and multipliers that come with them when you clear the whole of the reels can deliver some cracking action. If you enjoy the Egyptian theme and like playing slots with classy design and original features, you’ll find plenty to like in Valley of the Gods 2.

If you prefer simpler ancient Egyptian action, you have the Book of Ra Deluxe slot from Novomatic or the Cat Wilde and the Doom of Dead slot by Play ‘n GO which are both excellent.

Valley of the Gods 2 FAQs

What is the Valley of the Gods 2 return to player rate?

The Valley of the Gods 2 RTP is 96.2%. That’s a solid number and puts it in the middle of the pack as far as player return rates are concerned. It has a hit frequency of 17.7% and is medium to high variance so tread carefully.

What is the Valley of the Gods 2 maximum win?

The most you can win from Valley of the Gods 2 is 6,432 x your total bet. The best opportunities arise during the re-spins where the stacked wilds and expanding multipliers can really get things moving.

Does Valley of the Gods 2 come with free spins?

You won’t find a traditional free spins feature here. Instead, expect plenty of re-spins. Get on a roll here and you can also expand the reels up to 20,160 ways to win as well as bring the Scarab Collections features into play where expanding multipliers and sticky stacked wilds apply.

Is there a Valley of the Gods 2 mobile slot?

Yes, you can play Valley of the Gods 2 on all devices including mobile, tablet and computer. You’ll find superb sound and visuals alongside the unusual gameplay regardless of what type of device you’re using.