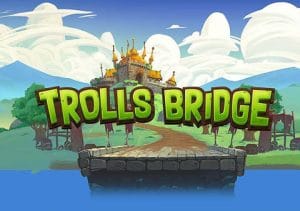 WHERE TO PLAY Trolls Bridge SLOT

Trolls Bridge is a 5 reel, 20 payline fantasy-theme video slot from Yggdrasil Gaming. Available on all devices, it comes with the developer’s usual design flair plus some cracking features. Look out for plenty of free spins with wild and multiplier extras as well as a bonus stone that can award consolation prizes of up to 1,000 coins on winless spins. Play from between 20p to 25p and £200 to 250 per spin.

There are usually few reasons to gripe about the design of Yggdrasil Gaming’s titles and Trolls Bridge is another good looker. The stars of the show here are the 4 trolls. The best of these is the red headed troll who’ll get you 250 coins if you land 5 on a payline. They’re joined by lower value hearts, diamonds, clubs and spades and a wild. As we mentioned in the intro, there are plenty of extras to get stuck into in Trolls Bridge.

Free Spins Bonus feature – this round is triggered by landing 3 or more of the free spins scatter anywhere on the reels on the same spin. You can look forward to 6, 8 or 10 free spins with 3, 4 or 5 feature bonus picks. Before the free spins start, you’ll be offered a selection of 18 cards. Behind each of them is 1 of the following feature extras:

Up your stakes in the base game and activate the Golden Bet feature and you’ll be awarded an extra feature pick whenever you land the feature.

Look out too for the Bonus Stone symbol which can land at random and trigger the Bonus Stone feature. If it hits on a successful spin, your prize will receive a multiplier boost of 2x, 3x, 4x or 5x. If the spin is a lose, you’ll be awarded a coin prize of 100, 200, 500 or 1,000 coins. Not a bad consolation prize!

We enjoyed Trolls Bridge – the design standards are as high as we’ve come to expect from Yggdrasil Gaming. There’s plenty of innovation on offer in the features too courtesy of the feature pick element. As far as volatility goes, Trolls Bridge lies somewhere in the middle. This is a medium variance game that offers a balanced range of payouts.

Trolls Bridge is another impressive all-rounder from Yggdrasil Gaming. With excellent visuals and some very playable extras, this is an entertaining slot and well worth a spin. I also recommend you try some of their other offerings with Vikings Go Berzerk highly recommended.