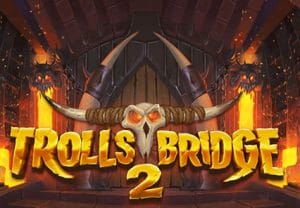 WHERE TO PLAY Trolls Bridge 2 SLOT

Trolls Bridge 2 is a feature-filled fantasy-themed video slot from Yggdrasil Gaming. Played using a 5 reel, 4 row, 20 payline game engine, this sequel comes with plenty of extras. Look out for colossal symbols, stones that can award multipliers and a free spins round where a bumper selection of modifiers are active. Play on all devices from between 20p and £100 per spin.

This is another well designed Yggdrasil Gaming video slot. Set against a fortress backdrop, you’ll see playing card suit symbols as well as a quartet of higher paying trolls. The best of them is the troll with a bone in his nose which pays 2, 6 or 8 times your bet if you land 3, 4 or 5 in a line. There’s also a regular wild.

The wild and the 3 troll symbols can all appear in colossal formation. These oversized symbols can stretch to 2×4 to create some potentially large winning clusters. This is called the Colossal Bridge feature. There are plenty of other extras on offer in Trolls Bridge 2.

You have the Free Spins feature which is triggered by landing 3 or more free spin scatters on the same spin. You will get:

You’ll then pick to receive the following feature picks:

In the base game, you’ll have the option to activate the Golden Bet feature – this costs an extra 10 coins per spin. This means each spin will be worth 14p per spin (minimum bet) up to £140 per spin (maximum bet). In return, you’ll receive an extra pick when you trigger the Free Spins feature.

Then you have the Bonus Cauldron feature – the cauldron symbol appears on reel 5 only. When it hits, you’ll win 1 of the following extras:

Last but not least is the Bonus Stone feature – whenever the stone symbol hits, it awards a multiplier which boosts your payout by 2x, 3x, 4x or 5x.

The cartoon style imagery in Trolls Bridge 2 works well and there’s an epic quality to the orchestral soundtrack. The gameplay impresses too. If you like plenty of variety from your play, then you won’t be disappointed with what’s on offer here.

Overall, I prefer Trolls Bridge 2 to the original, Trolls Bridge – the features are pretty much the same but the imagery and graphics and much better in the sequel. If you want to look at other sequels, Dead or Alive II from NetEnt blows the original (Dead or Alive) out of the water (and most other video slots we’ve ever played) with potential wins of 111,111.11 times your bet to be won from 1 of free spins features.