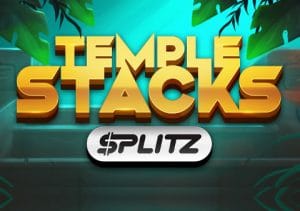 Go hunting for lost Aztec treasure in the Temple Stacks: Splitz slot, the first release from Yggdrasil Gaming to use the developer’s Splitz game engine. The base game mechanic is a standard 5 reel, 3 row, 243 ways to win set up. Splitz reels can divide to show up to 12 matching symbols which can take the ways to win up to 59,049 and 248,832 in the feature. There’s also a free spins round and respins where scatters turn wild. Head to the central American jungles from between 10p and £100 per spin.

The design in Temple Stacks: Splitz has Yggdrasil Gaming’s usual colourful look. Set against a jungle backdrop, the reels are set within a stone temple building. There you’ll find 5 lower value animal fossil symbols and 5 more rewarding coloured blocks. The best of them is the red block which pays 2.5 times your total bet if you land 5 on adjoining reels.

So far then, so standard. What makes Temple Stacks: Splitz a little different from your standard Yggdrasil release is the Splitz element. On any base game spin, you could see 1 or 2 reels filled with a totem pole-style symbol. This divides into anything from 3 right up to 9 matching symbols (more in the feature).

With all these extra symbols, you’ll have extra chances to create a winning combination. If the Splitz reach their full size, 59,049 ways to win will be active on each base game spin.

If you land 2 free spins scatter symbols on the same spin those reels will lock in position and a respin is awarded in the Respin feature. The scatters also turn wild during that respin. Ideally, you’ll be looking for a third scatter to trigger the Free Spins feature. The extra wilds can get the coins flowing too though.

To trigger the Free Spins feature you’ll need to land 3, 4 or 5 scatters on the same spin, either on a standard spin or with the help of a respin. You’ll pocket and award of 1, 10 or 100 times your bet depending on the number of scatters.

There are 4 different levels of free spins. 1 level is unlocked each time the feature is triggered 4 times. Retriggers are possible too. Each level offers more ways to win as there’s potentially more Splitz mystery stacks:

The Megaways mechanic has been a runaway success and there are some similarities to Yggdrasil Gaming’s Splitz game engine where the number of potential ways to win varies with each spin or free spin. As usual for an Yggdrasil Gaming title, we’ve no complaints about the design of Temple Tracks which looks and sounds terrific.

Temple Stacks: Splitz is a promising first release as it’s high variance and can serve up 25,000 x bet payouts on every free spin. If you’ve enjoyed Megaways slots, then this is one to consider as it’s relatively simple in terms of gameplay. We look forward to seeing more Splitz slots in future – if you want the game that started it all off, Big Time Gaming’s Bonanza Megaways game is the one to play