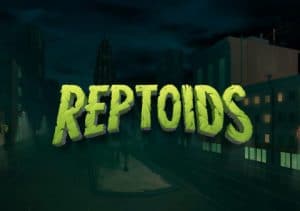 WHERE TO PLAY Reptoids SLOT

Aliens masquerading as humans are threatening to take over the world. We’re in classic conspiracy thriller territory in Reptoids, a superbly designed 5 reel, 20 payline video slot from Yggdrasil Gaming. Boasting top sound and visuals, it comes with a special Alien Detector that can turn symbols wilds. Also on offer are free spins where you could end up with 6 wilds symbols spinning around the reels. Play on all devices from between 10p and £100 per spin.

Reptoids harks back to the classic alien invasion themed movies of the 1960s. The setting is an American street scene. On the reels you’ll see 4 lower value military medals and 6 higher value human characters. There’s a policeman, a nurse, a scientist, a reporter and a general.

On each spin, you’ll see a frame move around the reels and land on a symbol – this is the Repto Detector feature. If it lands on 1 of the 6 human characters, that symbol turns wild. Any matching character symbols on that spin also morph into a wild. A new payout consideration is made with the new wilds in position.

Turn 2 standard symbols into wilds and you’ll get another 2 free spins. Land all 6 symbols in the Alien Detector and you’ll have 6 wild symbols spinning around the reels. You’ll have also added 6 extra free spins to your total.

We very much enjoyed Reptoids – this isn’t a theme we see all that often but it works well. The imagery is terrific and the spooky soundtrack is a perfect fit. The gameplay offers something a little different too. The Alien Detector adds wilds regularly to spice up the base game. The real potential comes via the Free Spins feature though – if you manage to detect all 6 of the aliens the extra wilds can deliver some fantastic results.

Reptoids is a very entertaining game. The high spec design is a given from Yggdrasil Gaming – less expected perhaps is the innovative gameplay, with the free spins round having the potential to be a cracker. If you’re fancy a break from the steady stream of Chinese, Egyptian, pirate and leprechaun-themed video slots then Reptoids offers something that’s both different and enjoyable. I would also suggest you try Trolls Bridge and Alchymedes from Yggdrasil Gaming.