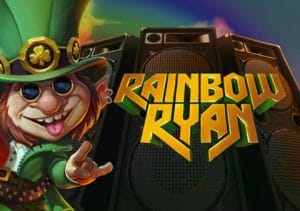 WHERE TO PLAY Rainbow Ryan SLOT

Turn on, tune in and rock out in Rainbow Ryan, an Irish luck themed video slot with a heavy rock twist. Created by Scandi developers Yggdrasil Gaming, it’s a 6 reel, 4,096 ways to win game that comes with synchronised reels and a free spins bonus round. Play from between 50p and £250 per spin.

The Irish luck-themed game is a staple of many online casinos but the design in Rainbow Ryan is a little different to the offerings we’ve come to expect though. Instead of 4-leaf clovers and pints of stout, you’ll see microphones and boots.

The setting is a music festival stage and the reels are enclosed by banks of speakers and lights. The most rewarding symbol is the hat of gold coins (okay, there are some traditional Irish luck symbols here!) which awards 250 coins if you land 6 in combination. Winning lines are created by landing 3 or more of the same symbol on adjacent reels.

Rainbow Ryan strums away on his guitar throughout the spins. That guitar can burst into life and randomly trigger 1 of the game’s 2 feature rounds. That’s the Rainbow Reels feature where Ryan’s guitar syncs reels so that the same symbols spin on each. This can be anything from 2 right up to all 6 reels.

The second feature is the Free Spin Mode feature which is activated by landing 3 or more of the amp scatter. The more amps, the more free spins – land 3, 4, 5 or 6 and you’ll get 7, 10, 15 or 20 free spins. So far so standard. What makes this feature stand out are the Rainbow Reels.

On each free spin, at least 2 synced reels will be in play. The number of synced reels can increase on any free spin but that number cannot go down. Land multiple matching reels here and some fantastic action is possible.

This is a pretty volatile video slot as the variance is in the medium to high range. The best opportunities certainly come via the free spins. We managed to land a payout of over 250 times our stake from the minimum of 7 free spins after getting 4 synced reels – saying that, you can win up to 2,000 times your total bet on each spin!

There’s usually little to grumble about when it comes to the design of Yggdrasil Gaming slots and Rainbow Ryan is another cracker. The glossy visuals are superbly done and the guitar-heavy backing track is an ideal accompaniment. Rockers and leprechauns seem an unlikely combination but it can be found in IGT’s Shamrockers Eire to Rock.