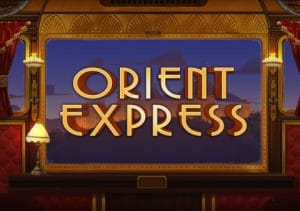 WHERE TO PLAY Orient Express SLOT

Enjoy the golden age of railway travel in Orient Express, a very classy looking 5 reel, 20 payline video slot from Yggdrasil Gaming. The slot version of the world-famous train takes in stops in Paris, Venice, Belgrade and Istanbul complete with free spins and a special feature on offer in each. Extra perks on this journey include walking wild re-spins, wild reels, added wilds and multiplier boosts of up to 5x. Hope aboard from between 20p and £500 per spin.

The Orient Express was the byword for high-class travel – Yggdrasil Gaming hasn’t let us down here and the design is just as opulent as you’d expect. An overcrowded commuter service from Waterloo this ain’t.

With a city skyline in the backdrop, the reels appear in a first-class railway carriage. Joining the lower value suit symbols are a quartet of dapperly dressed passengers. The glamorous woman is the best of these, awarding 1,000 coins for a 5-symbol combination.

There’s also a wild, the Orient Express logo, which can land while you’re travelling in any of the 4 cities. It replaces everything apart from the free spins scatter symbol. Just like the real train, you’ll start your Orient Express journey in Paris.

Paris – on your trip to the French capital, look out for elderly train porter who is a second wild. He can appear at random following any spin and award a re-spin. The porter stays on screen as a walking wild. The re-spins continue as long as there’s a wild on view. Expect to see more wilds during the Free Spins feature.

Those free spins are activated by landing 3, 4 or 5 scatters on the same spin. After you’ve played your 7, 15 or 30 free spins, you’ll progress to the next destination on your journey, Venice. You can also retrigger more free spins (up to 60 in total) in all free spins features.

Venice – you won’t see the Parisian porter in Venice. Instead, you’ll see a multiplier clock symbol which is also an extra wild. After a winning spin, the hands of the clock spin to reveal a multiplier figure of 2, 3, 4 or 5x which is applied to you win. The free spins are triggered in the same way as in Paris. This time, multipliers are applied to all winning free spins. Complete this stop and you’ll head to the Serbian capital.

Belgrade – wild mini locomotives join the action in Belgrade, travelling from right to left. Where the tiny train stops will turn that reel or reels into stacked wilds. Trigger the free spins here and you’ll get at least 1 and possible 2 or 3 wild reels on each free spin.

Istanbul – the final stop on your journey is Istanbul. Keep an eye out here for the postcards that can randomly fly across the reels and turn random symbols into wilds. Between 2 and 12 symbols can turn wild on each spin in both the base game and the free spins round.

Once you’ve reached all 4 destinations you’ll be able to take your pick of the 4 cities – the choice is yours. We hoped that Yggdrasil Gaming would produce a suitably lavish looking video slot here and they certainly have. The visuals have a cartoon style but are very classily done. As is the themed backing track and the gentle hum of the train on the tracks in the background – it all looks and sounds rather lovely.

The gameplay impresses too, offering plenty of action and variety regardless of which of the 4 cities you’re playing in. This isn’t a very volatile game though with The variance in the low to medium range and maximum wins of up to 200 times your stake.

With plenty of bonus extras and more than a touch of glamour, Yggdrasil Gaming’s take on the world-famous train is well done. It’s well worth taking a trip on this version of the Orient Express. If you like video slots with modes, Yggdrasil Gaming’s Seasons is recommended.