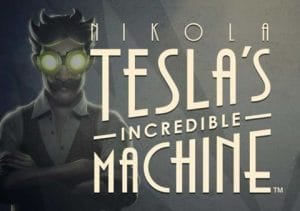 Join the scientific mastermind and genius inventor in Nikola Tesla’s Incredible Machine. Created by Yggdrasil Gaming in co-operation with Rabcat Gambling, it’s a 5 reel, 25 payline video slot that crackles with energy. Superbly designed, it comes with special Energy Bursts that awards exploding wilds, replacement wilds and cloned reels. There’s also a free spins round. Play on all devices from between 25p and £75 per spin.

First impressions here are very favourable. The design is terrific. Tesla’s laboratory forms the backdrop to the action. On the reels you’ll see A to 10 royals as well as a range of symbols relating to the scientific theme. They include a capacitor, goggles and a pocket watch. The latter is the best paying symbol. Land 5 of them on a payline and you’ll pocket an award equal to 40 times your total bet.

Tesla himself is the wild. He replaces all the standard symbols whenever he lands. If you manage to land 5 Tesla wilds in combination, you’ll pocket an award of 40 times your total bet. There are plenty of extras on offer here.

Energy Burst feature – this is triggered by filling the whole of the middle reel with 3 matching symbols. You’ll then receive 3 or 5 bonus spins depending on which symbol triggered the bonus. You can also look forward to an assortment of sticky wilds, symbols that transform into wilds when they hit or 3 cloned reels which will show the same matching symbols.

Free Spins feature – this round is triggered in the usual manner by landing 3, 4 or 5 scatters on the same spin. You will then receive 8, 10 or 12 free spins. These are played using a win both ways game engine some winning combinations can start from reels 1 or 5.

At the start of the round, a sticky wild is added to the middle position of reel 3. Look out for the level up scatter which can appear on reels 1 and 5. When this hits during the free spins, it moves you up a level and adds a new sticky wild on reels 2 or 4. There are 5 potential levels to work through here.

Yggdrasil Gaming has created a cracking game here. The design is as impressive as you’d hope and there’s plenty of variety from the gameplay. Those features can pack quite the charge too which is just what you’d expect from a video slot based on one of the pioneers of electricity. With payouts of up to 1,000 times your bet on every spin, you can win up to 4,100 times your bet in the Free Spins feature in total.

We enjoyed Nikola Tesla’s Incredible Machine. It looks and sounds terrific and delivers gameplay to match. If you’re after a fresh, all-rounder, then this electrifying title delivers. If you want charged up action, Danger! High Voltage from Big Time Gaming is a better proposition.