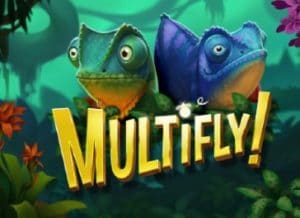 WHERE TO PLAY MultiFly SLOT

Venture deep into the jungle where a group of colourful chameleons can deliver some big multiplier prizes in MultiFly. Created by Yggdrasil Gaming, MultiFly is a bright and colourful 5 reel, 243 ways to win video slot that comes with dropdown wins and reel multipliers which increase with each wild that hits. There’s also a free spins feature where the multipliers keep on rising. Stakes here range from between 20p and £100 per spin.

The thick foliage of the jungle is the setting for MultiFly. Joining the A to 9 royals on the reels are lizard, frog, toucan and parrot symbols. Land 3, 4 or 5 of the latter, starting from reel 1 and you’ll pocket an award of 0.8, 1,5 or 4 times your total bet. There’s also a wild that replaces all the standard symbols.

MultiFly uses a Dropdown game mechanic. After a successful combination lands, those winning symbols are removed and new ones drop down and replace them. One of these new dropped symbols will be a wild. The drops continue until there’s one where no new winning combination is created.

Here, the multipliers are joined. For example, a 2x multiplier and a 3x multiplier would deliver a 6x boost to your payout. You can keep tabs on the size of the multiplier in the chameleon meters above each reel. Reel multipliers go back to their standard 1x state following a losing symbol drop.

The Free Spins feature is triggered by landing 3 scatter symbols on the same spin. Your reward is 10 free spins. The dropdown game engine and reel multipliers are in play here. Any multiplier you have live on the triggering spin are carried over to the free spins.

The reel multipliers don’t revert to 1x following an unsuccessful drop either. They remain the same or rise throughout the round.

MultiFly looks and sounds excellent. The visuals are just what we’ve come to expect from an Yggdrasil Gaming slot. The rhythmical backing track is rather good too. We’ve played plenty of symbol drop slots and you’ll get the basic mechanic here.

The added wild and reel multiplier extras are a nice wrinkle though and certainly spice up the action – to the tune of 10,000 x bet per spin or free spin. Yggdrasil Gaming are one of our top developers and they’re created another impressive release here. If you like the jungle theme, then go forth and MultiFly.

If you like the mechanic, it can be found in plenty of other slot games – it’s referred to as cascading reels/symbols or avalanche reels. NetEnt’s Gonzo’s Quest was the first to use it and can give you multipliers up to 15x in the Free Fall feature.