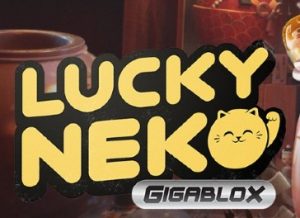 A small Japanese shop that sells Daruma dolls is the setting for the Lucky Neko: Gigablox slot, a highly unusual game from Yggdrasil Gaming. The Gigablox part of the title refers to symbol blocks that can land in 2×2, 3×3 or even 4×4 shapes in the base game. There’s also a free spins round where the payouts from 1 randomly selected symbol is boosted by 5x. You could also see colossal 5×5 and 6×6 Gigablox in this round. See what else this beautiful Japanese store has to offer in our Lucky Neko: Gigablox review.

It’s not just the design that’s a little unusual in Lucky Neko: Gigablox. The gameplay is too. There are big symbol blocks, free spins, blessed symbols with multipliers and much else besides.

On each spin, you can expect to see plenty of Gigablox. These are 2×2, 3×3 and 4×4 blocks made up of identical symbols. The Gigablox can be any symbol including the wild or the free spins scatter symbol.

The silver cat statue is that free spins symbol. You need to land 5 or more of the on the same spin to trigger the Free Spins feature. The number of free spins awarded is equal to the number of scatters. For example, 5 or 10 scatters equals 5 or 10 free spins. The maximum you can land is 16 free spins.

Before the free spins begins, 1 symbol is chosen at random to be ‘blessed’. All winning combinations made up of the ‘blessed’ symbol receive a 5x multiplier boost throughout the free spins.

Those free spins are played on an expanded game machine that is made up of 6 reels and 8 rows. This means you’ll have 85 paylines active, rather than the usual 40.  Each free symbol that lands during the bonus round adds 1 extra free spin to your total too – with no limits.

It’s not just the size of the game engine that expands in the Free Spins feature. The sizes of the Gigablox do too. As well as the 2×2, 3×3 and 4×4 Gigablox, you could land even bigger 5×5 or even 6×6 Gigablox while the free spins play out.

The base game action in the Lucky Neko: Gigablox slot takes place on a 5 reel, 4 row machine that offers 40 paylines. This changes when you trigger the Free Spins feature though. A win is created when matching symbols appear on any of the paylines, from left to right beginning on reel 1.

There’s a huge variety available when it comes to bet levels. Stakes start at just 8p per spin, rising to a maximum of £100 per spin.

You can set up to 1,000 autoplay spins or leave it them to run indefinitely. Set these via the tab next to the spin button. If you want to set win and loss limits you have to set up autoplay via the setting button. You can also set the spin speed from this screen, as well as the audio effects. It’s all very simple and intuitive.

The RTP here is 96.4% which is pretty solid. We found the Lucky Neko: Gigablox volatility to be on the high side. As a result, the maximum win is 6,953 x your total bet.

Lucky Neko: Gigablox Theme – you won’t see many better designed slots than this

One area in which Lucky Neko: Gigablox really does excel is in its design. You won’t find many better looking and sounding slots than this. Yggdrasil Gaming slots are usually easy on the senses but they’re really upped their game here. With a gentle Japanese soundtrack playing in the background, it creates a lovely ambience.

The base game action is set in a cosy Japanese shop. The lower value heart, diamond, club and spade symbols are beautifully ornate. They’re joined by 4 higher paying doll character blocks. These are packed full of detail and superbly drawn.

The top standard symbol pays 3.5 or 8 x your total bet if you land 5 or 6 across a payline. The golden cat symbol is the wild. This replaces everything apart from the free spins symbol. The wild can appear in a Gigablox formation which can mean big clusters of matching wild symbols.

Yggdrasil Gaming’s game interface is very straightforward to use to. Click on the + button in the bottom left-hand corner of the screen to access the info bar. This gives access to the paytable, game rules, settings, game history and sounds. It’s all very easy to do.

Japanese dolls wouldn’t usually be near the top of our list of favourite slot themes. We were charmed by Lucky Neko: Gigablox though.  The sound and visuals are terrific and as good as you’ll find anywhere. The gameplay offers plenty of variety courtesy of the Gigablox and the extras that comes with the Free Spins feature.

It’s all rather lovely. If you’re looking for a slot that takes you away from it all then Lucky Neko: Gigablox could be the place to start. If you want another taste of Japan, Pixel Samurai by Playtech is recommended.

❓ What is the Lucky Neko: Gigablox RTP?

The Return to Player rate in the Lucky Neko: Gigablox  slot is 96.4%. That puts it in the upper end of the RTP scores. It’s not the highest number we’ve come across but not the lowest either. You should land a winning combination every 6 spins.

🎰 What is the Lucky Neko: Gigablox maximum win?

It’s possible to land a top payout of some 6,953 x your bet in the Free Spins feature if you land a perfect combination that’s been boosted by the ‘blessed’ symbol which comes with a 5x multiplier. There are also more paylines – 85 compared to 40 in the base game.

🥇 Can I play Lucky Neko: Gigablox on mobile or tablet?

Yes. The Lucky Neko: Gigablox mobile and slot versions come with the same lush design and innovative gameplay that’s available in the computer version. It’s perfectly playable on a small-screen handset. You can try the game for free on any device here at CasinoManual.co.uk.