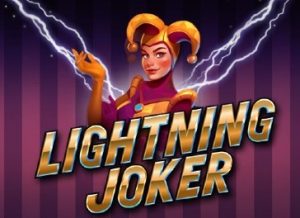 WHERE TO PLAY Lightning Joker SLOT

Yggdrasil Gaming is best known for its beautifully designed slots that are full of features and backstory. In the Lightning Joker slot, you’ll find the usual classy sound and visuals but they’ve kept the gameplay here super simple. This fruit machine re-boot is played using a 3×3 reel grid that offers 5 paylines. Land 2 matching reels and they’ll freeze and the third reel spins again. Fill all 3 reels with matching symbols and you’ll get a Multiplier Strike which boosts the payout by up to 10x. Mystery Wins can deliver mighty payouts of up to 10,000x. Find out more in our detailed Lightning Joker review.

There’s a retro feel to the gameplay in Lightning Joker. You won’t find much in the way of complex feature rounds here. This simple slot can still pack a knockout payout punch though courtesy of the Multiplier Strikes and Mystery Wins.

This feature is triggered by filling 2 reels with the same symbol. Those reels lock in position and a respin follows. This gives you a chance to land a matching symbol (or symbols) on the third reel and hopefully a big winning combination.

Fill all 9 positions on the reels with the same symbol (or wild) and you’ll benefit from the Multiplier Strike. This gives what is already a potentially large payout a big multiplier boost. The winning symbol will be surrounded by 2x, 3x, 5x and 10x multiplier symbols.

These are then zapped in turn by a lightning strike. The last multiplier left standing is the one that’s applied to your payout. If you were to fill the reels with wilds and then get a 10x multiplier, you’d pocket 800 x your bet.

These special bonus prizes are awarded when you land 2 or more of the Lucky Joker symbol anywhere on the reels on the same spin.

The minimum bet is just 5p which is ideal for a microstakes starter. This rises to a potential maximum of £50 for the experienced high rollers.

Yggdrasil Gaming’s game interface offers plenty of options when it comes to autoplay. You can set between 10 and 1,000 autospins or leave them running indefinitely. There are also win and loss limits via the settings tab. You can also alter the spin speed here as well as adjusting the soundtrack and ambient noise to whatever levels suit.

The RTP is 96.3%. That puts Lightning Joker in the middle of the pack when it comes to return to player rates. We’ve seen better number but it’s certainly not stingy on the RTP front. The win frequency is 17.6% meaning just under 1 in 5 spins.

We found the action in Lightning Joker to be rather volatile. The Mystery Wins don’t happen all that regularly but they can deliver a big haul of coins in the blink of an eye. The max win is 10,000 x bet per spin.

There’s also a detailed game info section which is a nice complement to the paytable. The paytable gives the payouts in monetary rather than coin value.

As you might expect from a fruit machine-style slot, Yggdrasil Gaming has kept the design in Lightning Joker rather simple. The dark blue reels are seta against a purple, curtain backdrop. On the reels you’ll find a collection of classic fruity imagery. In order of value are cherries, lemons, grapes and watermelons which are followed by a bell and a lucky 7.

The top-paying standard symbol is the gold star which awards 5 x your total bet if you land 3 on a payline. As per usual, the wild symbol substitutes for all the standard symbols. The wild is the most lucrative symbol too. Land 3 of them on 1 of the game’s 5 paylines and you’ll pocket an award of 16 x your total bet.

Even though the theme is rather old school, there’s still a glossy sheen to the imagery which is pure Yggdrasil Gaming. The same goes for the almost easy listening-style electronic backing track. It makes a rather soothing accompaniment to the gameplay. No complaints about the sound and visuals here.

The simple set up and straightforward gameplay make Lightning Joker an ideal choice for mobile play. The Lightning Joker mobile slot offers the same basic but rather classy design as the desktop. The big multiplier awards are on offer regardless of what you’re playing on.

This update of the classic 3-reel fruit machine is nicely done. The sound and visuals maintain Yggdrasil Gaming’s usual high standards and are easy on the senses. Yes, the gameplay is simple. There’s more than enough going on to keep things interesting though.

In fact, the respins, multipliers and mystery awards make for some very playable and volatile action. If you like old school fruities with a twist or 2 thrown in, there are worse places to start than Lightning Joker. Prefer slots with free spins and other bonus features? Champions of Rome and Wolf Hunters (both by the same provider) are 2 of their best slots.

What is the Lightning Joker RTP?

The Lightning Joker RTP is 96.3%. That puts it in the medium range when it comes to return to player rates. For every £100 wagered, on average £96.30 is returned via the prize pool.

What is the maximum win in Lightning Joker?

The Lightning Joker maximum payout stands at a cool 10,000 times your total bet for the Mystery Win feature. That’s a big old top prize for any slot, let alone one that is played using a 3-reel, 5 payline game engine. On any spin, you can win 800 x bet.

What is the Lightning Joker slot variance?

Who is the Lightning Joker slot developer?

Lightning Joker has been created by Yggdrasil Gaming. Despite the simple theme, the design here is up to the developer’s usual high standards. They’ve packed some cracking extras into the gameplay too to really spice up what could have been a rather tired re-boot.