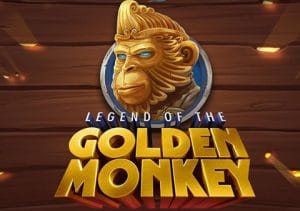 Legend of the Golden Monkey: Demo

WHERE TO PLAY Legend of the Golden Monkey SLOT

Pay homage to the Legend of the Golden Monkey in this 5 reel, win all ways video slot powered by Yggdrasil Gaming. Based on the Chinese legend, it comes with plenty of extras including sticky wilds, count down wilds, transforming symbols, treasure chest bonuses of up to 1,000 coins as well as a trio of free spin feature. Play from between 25p and £125 per spin.

Legend of the Golden Monkey is based on the story of Sun Wukong and the sound and imagery have a strong historical Chinese feel. Complementing the lower value playing card suits are a selection of crowns, potions, shields, scrolls and goblets.

Look out too for sticky wilds which can land on reels 2 and 4 – when they form part of a winning combination, they’ll remain in place for the spins that follow as long as you keep winning. On reel 3, you’ll find the count down wild – when this hits, it will remain locked in position for 3 spins. The animated Legend of the Golden Monkey himself can also appear and in the process transform a symbol to create a new winning combination.

Also on offer is a treasure chest symbol which appears on reel 5 only. In the base game, this awards a payout of up to 1,000 coins and triggers the Free Spins feature – you can also trigger the free spins by landing 3 or more of the free spins symbol anywhere on the reels. Landing 3 doesn’t award any cash award but 1,000 or 5,000 coins are on offer with 4 or 5 free spin scatter symbols. Once triggered, you’ll be given the pick of 3 options:

Incremental Wilds – here you’ll be given 6 free spins. 1 wild is added on reel 2 or 4 on each free spin until you have the full complement of 6 added wilds.

Stacked Wilds – 8 free spins are added here, complete with a triple stacked wild that can hit on the middle reel.

Starting Wild – opt for this and you’ll receive 10 free spins. A sticky wild is placed in the middle of reel 3 for each of them. Standard sticky wilds can also hit on reels 2 and 4.

We found plenty to like in Legend of the Golden Monkey – the design is as glossy as we’ve come to expect from Yggdrasil Gaming with the action playing out to a catchy, Chinese style backing track. There’s plenty on offer as far as features go too. You won’t be waiting ages to trigger them and they can still deliver some tasty payouts.

The sticky wilds mean it’s possible to hit big wins in the base game too. If we had to opt for 1 of the free spins options, we’d go for the stacked wild. The variance is in the medium to high range. Yggdrasil Gaming has come up trumps again – well-designed and offering plenty of action, we’re more than happy to pay our respects to the Legend of the Golden Monkey. I also recommend Playtech’s Sun Wukong which is also based on the Legend of the Golden Monkey.