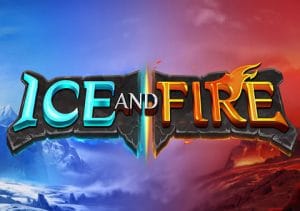 WHERE TO PLAY Ice and Fire SLOT

Dragons from warring realms go head to head in Ice and Fire, a 5 reel, 120 payline slot from Yggdrasil Gaming. Played across 2 distinct sets of reels, highlights here include duplicating wilds, cascading reels and free spins with up to 150 extra wilds added or expanding multipliers. Play this exciting game on all devices from between 12p and £30 per spin.

You’d hope that a slot with this fantastical theme would come with design to match and thankfully, Ice and Fire delivers. The 2 sets of reels have fire and ice themes. Each come with A to 10 royals as well as objects and animals relating to their elemental theme. The Ice and Fire Queens both offer awards of 53.33 x bet if you land 5 in combination.

Appearing on the middle 3 reels of each set is the book of spells. This is the wild. Land a wild on 1 set of reels and it copies itself onto the same position on the other set. A payout calculation follows with the extra wilds in place. This is the Shared Wilds feature and triggers quite frequently.

Ice and Fire uses a cascading reels game mechanic. Land a winner and those symbols are removed and new ones drop in and replace them. A new payout consideration is made with the extra wilds in place. If this results in a winner, the process is repeated. The cascades continue until no new winner is formed. Getting on a run of cascades can trigger a feature round too.

If you manage to land 4 or more cascading wins in a row, you’ll trigger the Free Games feature. Pick the Ice or Fire Dragon. This will reveal how many free spins you’ve been awarded (8, 10 or 15 free spins) plus how many extra wilds are added to the reels during those free spins. This will be either 100 or 150. The cascading reels are active here. Landing 4 or more in succession delivers a re-trigger.

You can also trigger the Multiplier feature by landing 3 or more scatter symbols across both sets of reels on the same spin. 3 scatters award 10 free spins with extra free spins awarded for each extra scatter on the triggering spin. Look out here for a multiplier which increases by 1x with each cascade win. Landing 3 or more scatters delivers a re-trigger and another round of free spins.

Call it the Game of Thrones effect but slot developers have gone a bit mad when it comes to fantasy-themed slots starring fire-breathing dragons. Ice and Fire is definitely one of the better ones. The design is as top class as you’d hope from an Yggdrasil release.

The gameplay delivers plenty of variety and action too thanks to the split reels, copying wilds and free spins with multipliers and added wilds. Put all that into the mix and you have a very playable take on this increasingly popular theme.

The bigger wins, up to 19,139 x bet, will come in the Multiplier feature due to the multiplier increasing with every cascade. The Ice and Fire slot also has a high 96.64% RTP. If it’s dragons you’re after, Yggdrasil Gaming’s Double Dragons is recommended – if you want big wins, the innovative Temple Stacks: Splitz (from Yggdrasil) is worth looking into.