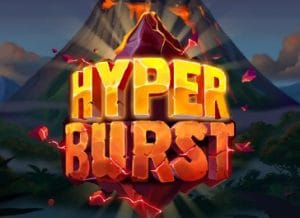 WHERE TO PLAY Hyper Burst SLOT

Landing a mighty eruption of coins is the goal in the Hyper Burst slot, an explosive volcano-themed game from Yggdrasil Gaming. The range of extras here isn’t massive but the Hyper Respins feature can deliver some red-hot results. It triggers following every winning spin and awards expanding colossal reels which can reach up to 4×4 in size. You could also benefit from expanding multipliers which can reach up to 10x. Hit the perfect combination and you could win 12,800 x your total bet from a single spin. Find out more about this wild volcano in our in-depth Hyper Burst review. As usual for a game from the Yggdrasil Gaming catalogue, we’ve no complaints about the design of the Hyper Burst slot. It looks and sounds terrific. A prehistoric island, untouched by civilisation forms the backdrop to the slot.

There’s a primitive feel to the visuals here which are nicely done. That visual flair is complemented by a rhythmical, drum heavy backing track that fits the theme very well. It can get a bit loud but there are options to adjust via the setting. You can also play with the just the ambient noise active if you want a bit of atmosphere. Overall, the design stacks up well.

On the reels you’ll find A to J royals alongside 4 brightly coloured carved totem heads. The most rewarding symbol is the red totem which pays 1, 2, 4 or 8 x your total bet if you land 3, 4, 5 or 6 in combination.

The Hyper Burst slot is played using a 6 reel, 4 row machine with 25 paylines. Land 3 or more matching symbols in one of those paylines, starting from the leftmost reel to create a winning combination.

You can try and explode this volcano at bet levels that range from between 10p and £100 per spin. Click on the Coin Value button to adjust your bet size.

Yggdrasil Gaming slots offers plenty of options when it comes to autoplay and Hyper Burst is no exception. You can run up to 1,000 autospins. Just click on the arrows to the right of the main spin button. If you want to add win and loss stop limits or adjust spin speed you can do so via the settings tab. You can also set it so autoplay stops whenever you trigger the re-spins.

The Hyper Burst RTP is 96.02% which is about average. With a hit frequency of 22%, you can expect a win every 5 spins on average (slightly over). The most you can win from a single spin here is 12,800 x your total bet. We found the action here to be pretty fiery as far as variance is concerned. That’s no surprise given the volcanic theme of Hyper Burst.

Respins and plenty of them are central to the action in Hyper Burst. They come with some potentially tasty extras attached too. It’s all about the Hyper Mode where multipliers up to 10x come into play. Every time you form a winning combination, the Hyper Respins feature is activated and a respin is awarded. On that respin, 2 of the 4 middle reels will display a colossal lava reel which is made up of 2×2 symbols.

Land a winning combination there and another respin follows. This time, the colossal lava reel is made up of 3×3 symbol blocks. Do the same again and you’ll get another respin with a 4×4 lava reel. When this happens, you’ll activate the Hyper Mode feature. You’ll also receive a 2x multiplier which doubles any wins from this respin.

Land a winner and another respin follows. The colossal 4×4 lava reel remains live and the multiplier increases. The respins keep on coming as long as a new winning combination is created with the multiplier rising each time to 3x and 5x until it reaches a maximum of 10x. If there’s a winless respin, the reels revert to their original state with no colossal reels present.

Hyper Burst Thoughts/Opinion – simple gameplay that packs quite the punch

This explosive prehistoric adventure is a simple one as far as features are concerned. The Hyper Burst slot isn’t overloaded with bonus features so if you like plenty of variety, this might not be for you.

The repetitive respins can deliver some pretty good action though, especially if you get on a run and bring the 4×4 symbol blocks and the increasing multipliers into play. Here is where the potential 12,800 x bet wins will come from.

Yggdrasil Gaming rarely disappoints when it comes to design and Hyper Burst is another fine-looking slot. It might be a little simple for some tastes but we enjoyed the potentially volcanic action on offer. If you want explosive action, the Gold Volcano slot by Play ‘n GO and Quickspin’s Volcano Riches are worth sampling.

What is the Hyper Burst RTP?

The Hyper Burst return to player rate is 96.02% which is in the mid-range as far as player return rates go. It offers a hit frequency of 22% meaning just over 1 in 5 spins will give you a winning outcome.

What is the Hyper Burst maximum win?

The maximum win per spin is 12,800 x your total bet. High variance, the bigger wins will come from the Hyper Mode feature where multipliers up to 10x come into play.

Is there a Hyper Burst free spins round?

You won’t find a traditional free spins feature here. Instead, you can expect plenty of respins which trigger following each winning spin. These come with expanding colossal symbols that can reach 4×4 in size followed by expanding multipliers which boost payouts by up to 10x.

Is there a Hyper Burst mobile slot?