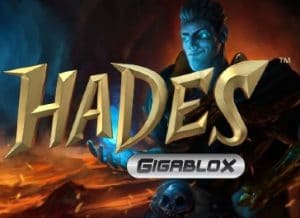 WHERE TO PLAY Hades: Gigablox SLOT

Join the ancient Greek god of the dead and king of the underworld in the Hades: Gigablox slot. This is the second game release to use the Gigablox mechanic where symbols can appear in blocks of up to 6×6 in size. There are plenty of other extras here too. In the Hades Wild Hunt feature, Hades can spring into action and battle the high value symbols and turn them wild. There’s also a Wild Hunt Free Spins feature that awards up to 36 free spins initially. The Cerberus Multiplier feature can bring multipliers of up to 10x into play. Discover what else is lurking in the underworld in our in-depth Hades: Gigablox review.

Hades: Gigablox Theme – join the wisecracking Hades in a trip to the ancient Underworld The sound, visuals and animations in the Hades: Gigablox slot are excellent. The dark underworld is the setting. With a Greek mythology theme, the reels are flanked by totems covered in skulls, skeletons and serpents.

There’s a heavy metal feel to the soundtrack. If that’s not to your taste, you can adjust so that you only hear the ambient background noise rather than the loud soundtrack. Hades pops up with a wise crack from time to time. It’s fine the first few times but had us reaching for the mute button.

Poised to the right of the reels is the animated Hades who dives into action when the Hades Wild Hunt feature triggers (more information below). Overall, the design here is terrific. The imagery is superbly done and creates a nicely atmosphere.

On those reels are lower value playing card suit symbols and 4 higher paying and rather grotesque animal symbols. These 4 symbols can all become wilds via the Hades Wild Hunt feature. The best of the symbols is the horned beast which pays 8 x your total bet if you land 6 on a payline.

Yggdrasil Gaming has created a Hades: Gigablox mobile slot. Very impressive it is too. The design here is dark but is clear enough on a small-screen device. There are plenty of moving parts given the Wild Hunt transformations and Gigablox. It all works smoothly on mobile though.

The Hades: Gigablox slot is played on a 6×6 reel grid which offers 50 paylines. Land 3 or more matching symbols in a payline, starting from reel 1 to form a winner.

You can take this trip to the ancient underworld at bet levels of between 10p and £100 per spin. You can run up to 1,000 autospins if required. If you want to set up win and stop loss limits, you’ll have to set up autoplay via the settings rather than the standard autoplay button. There’s an option to adjust spin speeds here too.

The Hades: Gigablox RTP is 96% which is about average. The hit rate is around 20% so expect to land a winner around once every 5 spins on average. The most you can win from a single spin is 11,129 x your total bet.

The Gigablox game mechanic is a little unusual and comes with some unorthodox extras. Look out for symbol blocks which can reach 6×6 in size, transforming wilds and free spins with multipliers of up to 10x.

To the right of the reels, you’ll see an animated Hades. Hades can spring into life at random on any spin and leap onto the reels. He’ll go into battle with any of the high value symbols on display. If Hades wins the battle, those symbols turn into wilds. A payout calculation is made after all the battles have taken place and the wilds are in position. Hades: Gigablox also comes with a Wild Hunt Free Spins feature. It’s triggered by landing 5 or more scatter symbols anywhere on the reels on the same spin. The number of free spins awarded is equal to the number of scatters.

In theory, you could land up to 36 free spins here. Scatters landing during the feature will add 1 more free spin to your total, with no limits. The Hades Wild Hunt feature triggers on each free spin so expect to see plenty of extra wilds during this round. Each high value symbol that is transformed into a wild (via the Hades Wild Hunt feature) is collected in a meter. Once a meter is full, it activates the Cerberus Multiplier feature.

If Hades fights and defeats a Gigablox symbols, all the symbols count towards the multiplier. For example, if Hades is victorious over a 3×3 block, 9 symbols are added to the multiplier meter.

There are various levels to work through here with multipliers of 2x, 3x, 5x and even 10x possible. Keep tabs on how close you are to bagging a multiplier in the meter to the left of the reels. Each time a multiplier level increases, 2 extra free spins are added to your total.

This virtual trip to the underworld is a playable one. The gameplay is rather unusual so a few spins in demo mode are recommended. The Gigablox can deliver some very solid action, especially if you combine them with the Hades Wild Hunt feature.

Free spins with multipliers are where the big wins will come from. Mix the innovative gameplay with the superb sound and visuals and the Hades: Gigablox slot is a game consider.  If you’re interested, you should try the Lucky Neko: Gigablox slot which was the first to use the Gigablox engine. If it’s Greek mythology you’re after, the Legend of Hydra slot by Playtech is highly recommended.

What is the Hades: Gigablox RTP?

The Hades: Gigablox return to player rate is 96% which puts it in the middle of the back. With a hit rate of just over 20%, you’ll get a winning combination every 5 spins on average.

What is the Hades: Gigablox slot max payout?

The Hades: Gigablox maximum win is a none too shabby 11,129 x your total bet. The key to winning big is from the Wild Hunt Free Spins feature where Hades battles monsters to give you multipliers up to 10x.

These are blocks of oversized symbols. Gigablox can appear in 2×2, 3×3, 4×4, 5×5 or 6×6 formation. A high value symbol in a big Gigablox can quickly give you big payouts.

Is there a Hades: Gigablox free spins round?

Yes, trigger the Wild Hunt Free Spins feature by landing 5 or more scatters on each spin. The Hades Wild Hunt feature is active on each free spin. Each transformed wild is added to a meter. Pass milestones in the meter to bring the Cerberus Multiplier feature into play with multipliers of 2x, 3x, 5x or 10x.