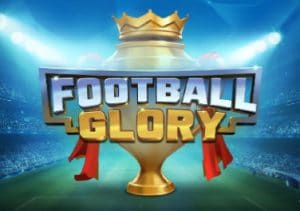 WHERE TO PLAY Football Glory SLOT

Yggdrasil Gaming is the latest developer to try and recreate the thrills of the ‘beautiful game’ in the Football Glory online slot. Played using a 5 reel, 25 payline game engine, look out for trophy-based pick me rounds, a free spins feature with modifiers and a super star free spins bonus where the 4 football player symbols turn into sticky wilds whenever they hit. Slots with this theme have been decidedly hit and miss affairs. Does this hit the back of the net? Found out in our Football Glory review.

There’s plenty of potential action on offer in the Football Glory slot. Extras on offer here include pick and click bonuses, a standard free spins round and free spins with sticky wilds. Let’s have a closer look.

Football Glory comes with 2 pick me bonuses. They’re triggered by landing the silver trophy on reel 4 or the gold trophy on reel 5. 5 balls will then appear from a pot, just as if you were doing the draw for the third round of the FA Cup.

You can trigger the Free Spins feature by landing 3, 4 or 5 free spins scatter symbols on the same spin as well as via the Silver and Gold Cups. You’ll then receive 7, 14 or 21 free spins. Before the round begins, you’ll be randomly awarded 1 of the following extras:

Each time a player symbol lands during the free spins, he’ll take a penalty. A successful kick turns the player into a wild for that free spin.

You can trigger the Silver and Gold Cup pick and click bonuses during the free spins too. The potential awards on offer from both are bigger than in the base game. You can also land sticky wilds and wild reels if the picks fall nicely.

Below the reels you’ll see images of the 4 players symbols. These each have an associated meter. Each time you land a winner made up of a player, you’ll fill up part of their meter.

Once a player’s meter is full, you’ll trigger the Super Stars Free Spins feature and receive 7 free spins. During these free spins your player will be in Super Star Mode. When he appears, the symbol turns into a sticky wild and locks in position for the rest of the round.

You can trigger the All Star Free Spins feature by filling player meters, from the pre-Free Spins modifier or via the Gold Cup game. If via the Gold Cup, all 4 players will be in Super Star Mode. That means they turn into sticky wilds whenever they hit.

The game engine is made up of 5 reels and 4 rows which offer 25 paylines. Stakes start at 25p per spin, rising to a maximum of £125 per spin. Wins are formed by getting matching symbols on adjacent reels beginning from the first reel.

Yggdrasil Gaming’s usual autoplay options are available here. Click on the button next to the spin button and you can set between 10 and 1,000 spins. To set the autoplay win and loss limits, click on the + button then head to settings. You can also set the pace of spins here as well as adjust the music and ambient noise. If you wish, there’s also an option to spin by hitting the space bar.

The RTP in Football Glory is 96.1% which puts it mid-table. The volatility is in the medium range. The max win is 400 x your bet per spin or free spin with a maximum of 4,000 x your bet to be won in any of the free spins features.

Football Glory Theme – not exactly a thing of beauty

The design in Football Glory isn’t the best you’ll see. With the packed stands of a stadium in the background, the plain blue reels are made up of A to J royals plus 4 identikit fictional footballers.  The best of the quartet is the ‘I can’t believe it’s not Cristiano Ronaldo’ symbol which awards 10x your total bet if you land 5 on a payline.

The visuals certainly aren’t the sharpest you’ll see – it looks like something from Euro 96! You’ll hear chanting from the crowd while you spin which is fine given the theme. Things get a bit weird during the free spins though.

The penalty kick sounds more like a marauding Viking slicing through an opponent with a sword than a goalie trying to save a spot kick. It’s really quite distracting and not a good fit.

Yggdrasil Gaming’s standard game interface is in play in Football Glory. As well as a paytable you’ll find a very useful help tab which gives even more information on the features and the potential prizes they offer. You can also check the game history.

There’s nothing special about the design of Football Glory on desktop devices so you won’t lose much if you’re playing on a tablet or mobile.

Football Glory Thoughts/Opinion – some cracking features, some not so great design

The features and gameplay in Football Glory are pretty good. The free spins with sticky wilds and other extras can be well worth landing the trophy bonuses can pep (excuse the pun) up the base game. You can expect to land them fairly regularly too which keeps things interesting.

We found the design here rather underwhelming though, especially the sounds in the free spins round which were rather off putting.

In Football Glory, Yggdrasil Gaming has made a solid attempt at bringing the atmosphere of the big game to the small slots screen. We wouldn’t say it’s a Champions League contender but neither is it in a relegation scrap. The more volatile, and potentially rewarding, Bicicleta slot (from Yggdrasil) is much better.

❓ What is the Football Glory slot RTP?

The RTP is 96.1%. That puts it in mid table when compared to other similar slots. Most wins will come from the multiple bonus features.

🎰 What is the Football Glory maximum payout?

You can win prizes of up to 4,000x your total bet in Football Glory. Per spin, you can win up to 400 x your bet from the Golden Cup feature.

🥇 What are the Football Glory bonus features?

There are 2 pick me rounds and 2 free spins features. The free spins come with wild modifier extras. Land the All Star Free Spins and the player symbols turn into sticky wilds when they hit.

No, Football Glory doesn’t have any ties to UEFA, FIFA or any clubs. It’s not the flashiest slot you’ll play as far as design goes but the range of extras make it worth a closer look.