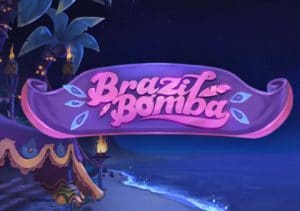 WHERE TO PLAY Brazil Bomba SLOT

Join Rio’s Mardi Gras festivities in Brazil Bomba, a 6 reel, cluster pays slot from Yggdrasil Gaming. Winning combinations cause avalanches which also bring expanding multipliers into play. Look out for bombs that can clear up to 16 symbol positions as well as a free spins round complete with even more multipliers. Play this lovely looking slot on your computer, tablet or mobile from between 10p and £50 per spin.

The setting here is a moonlit Brazilian beach – Copacabana beach that is. You’ll see Sugarloaf Mountain in the background as well as a carnival queen. The action takes place on a 6 reel, 8 row grid that’s made up of 12 brightly coloured shapes, objects and fireworks. It’s accompanied by a catchy samba-style backing track.

To create a winner, you’ll need to land a combination of 6 or more of the same matching symbol. The cluster can be vertical, horizontal or diagonal or a combination of all 3. The best symbol is the red firework. This offers double your stake if you land a cluster of 6. A full 48-symbol cluster pays 1,000 x your bet. It’s possible to have multiple winning clusters on the same spin.

After a winning combination lands, the successful symbols are removed and new ones drop in and replace them. Each successive avalanche also increases by 1x. The multiplier goes back to its standard 1x following a winless drop in the base game. There’s a meter on the right-hand side of the reels that shows the current multiplier.

On any spin or avalanche you could see a bomb symbol appear. These can hit anywhere on the reels apart from reels 1 and 6. An explosion follows which clears a star shape of up to 16 symbols. A new avalanche takes place and a fresh payout consideration is made.

Up to 40 free spins with expanding multipliers

Brazil Bomba also comes with a Free Spins feature. It’s triggered by landing 3, 4, 5 or 6 free spin scatter symbols on the same spin. Your reward is 5, 10, 15 or 20 free spins. The expanding multiplier is in play during the feature but it doesn’t revert to 1x following a winless drop either, it can only increase.

If there’s a multiplier active on the triggering base game spin, it’s carried over and becomes the starting multiplier during the bonus round. You can also retrigger the feature to give you up to 40 free spins in total.

There’s nothing massively original in Brazil Bomba but it’s the first grid slot from Yggdrasil Gaming. The avalanche reels, cluster pays and multipliers are a feature of many slots with this game mechanic. It’s all solidly done though, as is the design which is very impressive.

We found it to be quite volatile too and it offers top wins of 8.975.6 x bet per free spin. The RTP is at 96.3%. If you fancy joining the Mardi Gras festivities from the comfort of your armchair, this is a decent enough place to start. If you want grid slots, there are plenty to choose from – Blueprint Gaming’s Dragonfall and Play ‘n GO’s Honey Rush would be my recommendations.