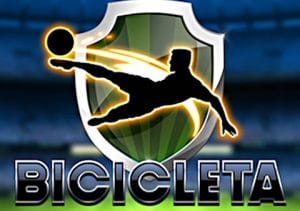 WHERE TO PLAY Bicicleta SLOT

Bicicleta is a 5 reel, 25 payline video slot from Yggdrasil Gaming – the game is football-themed and can be played across desktop, mobile and tablet devices from as little as 25p per spin to as much as £50 per spin. Released just before Euro 2016, bicicleta is the Spanish word for bicycle but means bicycle/overhead kick.

Set inside a football stadium, symbols on the reels are typical with 4 footballers dominating the reels – there are 4 of them in total each sporting a dodgy haircut. The red shirted footballer is the most rewarding symbol as he gives you 250 times your line stake for getting 5 across a payline.

When it comes to bonus features, there are 2 to score with – first up is the Free Spins feature which is played when you get 3 or more Free Spin symbols anywhere on the reels. 3 will reward you with 8 free spins, 4 will give you 16 free spins and 5 gives you 24 free spins.

The 4 footballer symbols will try and score a goal, by performing am acrobatic bicycle kick, when they land anywhere on the reels – if they do so, the symbols changes into a sticky wild meaning that it will remain in place for the duration of the Free Spins feature. If the player doesn’t score a goal, it still acts as the player symbol.

Bicicleta may be a football themed video slot but it looks fantastic with rewarding bonus features – the crowd also play their part as they cheer on and intensify the atmosphere when you have a winning streak, resulting in an incredible game experience. You cannot go wrong with Yggdrasil Gaming titles with Nirvana and Vikings Go Wild highly recommended.