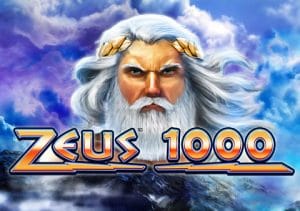 The Greek god of thunder can help summon up explosions of coins in Zeus 1000, a 10 reel, 100 payline slot from WMS Gaming. This ancient myth themed game uses the Colossal Reels game engine and comes with a bonus feature that offers up to 30 free spins complete with stacked symbols. Play from between 50p and £250 per spin.

Based on a popular brick and mortar casino slot, Zeus 1000 comes with 2 different reel sets – on the left side is a traditional 5-reel machine which is joined by a massive 5 reel, 12 row set on the right. They both have different paylines so you can create winning combinations on both.

Though largely independent, the 2 reel sets can combine to spectacular effect – land 4 stacked wilds on the main reel set and they will be transferred to the Colossal Reels turning the same reel into a giant, 12 high stacked wild on the other reels.

Zeus 1000 comes with a quality Free Spins feature which is triggered when the bonus symbol (lightning in Zeus’ hand) lands on the odd numbered reels on either reel set. The more bonus symbols that hit, the more free spins and bigger cash prize you’ll receive:

Once the free spins start, keep a special eye out for the Zeus symbol – if it appears as stacked on reel 1 of the main set during the free spins, it will transform into Zeus Add. With a clap of thunder and flash of lightning and up to 1,000 Zeus Add will join both sets reels for the spin that follows.

Basically, plenty of extra Zeus symbols of various values join the reels which really boosts your chances of landing multiple winning combinations – you’re guaranteed to land the Zeus Add feature on at least 1 occasion during the feature.

You’re sure to come out on top during the bonus round by at least 10 times your stake courtesy of the WMS Bonus Guarantee too – this feature can be found in other slots such as Montezuma.

Visually, Zeus 1000 is typical WMS fare – symbols on show include playing cards from A to J alongside ancient pottery, warrior helmets, chariots, winged horses, thrones and of course Zeus himself. They’re all very tidily done with the action playing out to a sweeping orchestral soundtrack.

As far as variance goes, Zeus 1000 is in the medium to high range – expect to find a steady stream of smaller value wins in the base game. The bigger payouts come via the bonus round but the free spins aren’t the easiest to trigger. You’ll need patience and a decent bankroll to take full advantage. With the high minimum spin of 50p per spin, this probably isn’t a slot for micro players.

Overall though, Zeus 1000 is a decent slot – the Colossal Reels aren’t to everyone’s taste but if you’re a fan of these WMS powered games, the Zeus 1000 is one to add to your rotation.