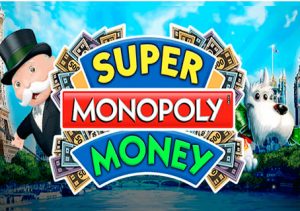 Super Monopoly Money is the second Monopoly slot to be produced by Scientific Games and the first to be launched by Williams Interactive/WMS. With 5 reels and 25 paylines, you can spin away from 35p to £24.50. There are a few bonus features as well as Monopoly Money which adds another dimension to this game. The slot is popular in land based casinos and has brilliant graphics and a jazz-like soundtrack which I quite like.

On to the features – you have the Free Parking feature which is central to the game. This activated when 1 or more Free Parking symbols show up on reels 2 to 5. You then choose from the 5 symbols to reveal a symbol which then applies to the reels – there are wilds, Monopoly Money Bonus symbols as well as 3 other symbols. If you pick a wild, this can be quite lucrative.

You also have the Free Spins Bonus feature which is triggered when you see 3 or more Bonus and/or Monopoly Money Bonus symbols on consecutive reels (starting from the 1st reel). You will receive 8, 10 or 15 free spins depending on how many symbols you get.

There’s more! Monopoly Money House and Hotel Awards can be won when Monopoly Money is not won after any spin. The more you stake, the bigger your chances of winning a Hotel or House. The slot may sound a little complex but you will it’s quite easy to understand once you start playing. The game is a medium variance one which I quite like and one that will surely prove popular. If you like more hard-hitting slots, Black Knight II by WMS is a must.