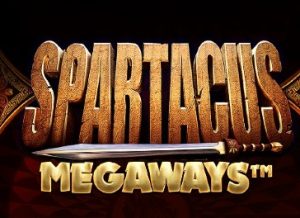 WHERE TO PLAY Spartacus Megaways SLOT

Join an uprising against the mighty Roman empire in the Spartacus Megaways slot, a 6 reel game from WMS. The basic Megaways mechanic has been given a tweak or 2 in this historical epic. Fully expanded, the reels can offer up to 1 million Megaways on any spin. You’ll find the usual cascading reels which keep on coming as long as a new winner is created as well as a Free Spins feature that awards free spins with expanding multipliers and expanding wilds. Payouts can reach up to 12,500 x bet on any spin. See if this trip to the amphitheatre gets a regal thumbs up in our in-depth Spartacus Megaways review.

The base game action in the Spartacus Megaways slot plays out on a 6-reel machine which is common enough for a Megaways slot. The way the reels are configured is a little different from the norm though.

On each reel, a red curtain can cover up to half the symbols. This, along with the number of symbols on each reel, has an impact on how many ways you can create a winning combination. You can see how many Megaways are currently active via the meter in the top right-hand corner of the screen.

Bet levels in Spartacus Megaways range from between 20p and £20 per spin. Use the + or – buttons below the spin button to adjust. You can set 5, 25, 50 or 100 autospins if required. You can also set win and loss stop limits. It’s a very simple process.

There’s a lavish, opulent feel to the design in the Spartacus Megaways slot. The regal looking reels are fit for a Roman emperor. With an ancient Roman theme, it’s based on gladiators from the Roman Empire era. The visuals are bright, colourful and nicely done. As is the stirring, rather martial backing track.  It certainly conjures up the atmosphere of an ancient gladiator battle.

Red and gold dominates the colour scheme. On the reels are lower value A to 9 royals alongside symbols that you might see in a gladiator contest in a Roman arena. They include an assortment of weaponry, a mighty tiger and a fearsome gladiator.

The most rewarding symbol is the Spartacus Megaways logo which pays 25 x your bet if you land 6 on adjoining reels. There’s also a wild that can land on the middle 4 reels only.

You can play Spartacus Megaways on all devices including tablet and mobile. There are lots of symbols here, so we preferred playing on a bigger screen. It’s perfectly playable on mobile though.

The Megaways mechanic has proved massively popular with players since its introduction by Big Time Gaming. Other developers are trying to put their stamp on it by introducing variations to the standard play and that’s just what you’ll find in the Spartacus Megaways slot. It comes with the standard cascading reel wins and free spins as well as expanding wilds and increasing multipliers.

On any spin you could see a purple Gem Drop jewel symbol appear. These come with a cash value of between 1 and 100 x your total bet attached.

After a winning combination hits, the successful symbols are blasted off the reels and new symbols replace them. Each explosion also uncovers part of the reels currently covered by the curtain. The symbol drops keep on coming as long as a new winner is formed.

If the reels reach their maximum size and are totally uncovered by the curtain, you’ll have 1 million Megaways active. This is known as the Cascading Reels feature.

The amphitheatre symbol is the scatter. Land 4 or more amphitheatre scatters anywhere on the reels on the same spin and you’ll trigger the Free Spins feature. You’ll then spin a couple of wheels:

The cascading reels are in play during the free spins. Each cascade win increases a multiplier by 1 in the Win Multiplier feature. This doesn’t reset following a winless cascade either as it only gets bigger.

Retriggers are possible here too which raises the prospect of even bigger multipliers. The Spartacus wild symbol is also important as it expands to give you a fully wild reel. Known as the Expanding Wilds feature, it uncovers symbols positions covered by the curtain for more ways to win.

WMS has taken the classic Megaways mechanic and given it a bit of shake to create the Spartacus Megaways slot. For all the moving parts, the gameplay is actually rather simple.

We found the Free Spins feature quite hard to trigger. It can be worth the wait if you get a good reel configuration and the multipliers start to motor. The expanding wilds will also help.

The classic movie version of Spartacus starring Kirk Douglas has become a Bank Holiday TV staple. The original Spartacus: Gladiator of Rome slot was a huge land-based and online success. We suspect the Megaways version to be even more popular.

If you want Megaways games, NetEnt has also revamped a classic game of their using the popular engine with Gonzo’s Quest Megaways.

What is the Spartacus Megaways RTP?

The Spartacus Megaways return to player rate is 96.32% which is slightly above average. It’s a high variance slot so expect smaller wins most of the time. The bonus features afforded the best winning opportunities.

What is the Spartacus Megaways maximum win?

The most you can win from a single spin in Spartacus Megaways is 12,500 x your total bet. Whilst possible on any spin, your chances increase in the Free Spins feature due to the expanding wilds and increasing multiplier.

Is there a Spartacus Megaways free spins round?

Yes, trigger the Free Spins feature by landing 4 scatters on the same spin. You’ll then spin 2 wheels to determine how many free spins and how many ways to win you’ll play with. Every win increases the multiplier by 1 and there are expanding Spartacus wilds.

Is Spartacus Megaways a sequel?

Spartacus Megaways is the Megaways version of the classic Spartacus: Gladiator of Rome slot. The latter is a hugely popular game both online and in land-based casinos.