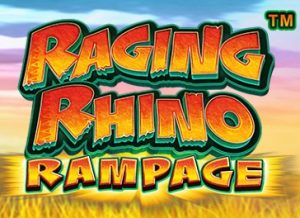 Join the big beasts on the virtual African plains in the Raging Rhino Rampage slot. Created by WMS, it’s a medium variance safari-themed slot that’s played on a 6 reel, 4,096 ways to win machine. Trigger the Free Games Bonus feature for up to 20 free spins complete with 2x and 3x wild multipliers which can combine. Before the free spins begin, spin the Wheel to win up to 50 extra free spins or 1 of 3 jackpot prizes which pay up to 2,500 x your bet. Find out more in our detailed Raging Rhino Rampage review. With blue skies in the background, you are taken to the African Savannah in the Raging Rhino Rampage slot. The design here is typical WMS. The imagery looks exactly like the original Raging Rhino slot which is a popular bricks and mortar casino game. It’s not the sharpest design you’ll see but it does the job well enough.

The green reels are made up of lower value royal symbols alongside 5 more rewarding symbols. They include a badger, crocodile, gorilla, cheetah and rhino. The rhino is the most valuable symbol and pays 7.5 x bet if you manage to land 6 in combination.

The tree against the sunlit backdrop is the wild. This can land on reels 2 through 5 only and substitute for all the standard symbols.

WMS has created a Raging Rhino Rampage mobile slot. It’s perfectly playable, especially if you use landscape mode to get the best use of the 6 reel game engine. The colourful design and simple features are well suited to playing on a smaller handset too.

The Raging Rhino Rampage slot is played on a 6 reel, 4,096 ways to win machine. To create a winner, landing matching symbols or wilds on adjoining reels, starting from reel 1. On any spin, reels can expand so they are 6 symbols high. They reset to their standard 4 rows for the following spin.

Bet levels range from between 20p and £20 per spin. You can set up to 100 autospins if required, complete with turbo mode. You can vary where you have the spin button too.

The main extras on offer in Raging Rhino Rampage are free spins and wild multipliers. Before the round begins though, you’ll have a chance to boost your original haul while at the same time having a shot a scooping a special jackpot prize. On any spin, the number of positions on 2 or more reels can increase, up to 6 high. Known as the Expanding Reels feature, the more positions on a reel, the more ways to win. If all 6 reels contain 6 symbols each, you’ll play with 46,656 ways to win:

The Stampeding Reels feature can trigger on any spin. A stampede adds extra top-paying rhino symbols on the reels, boosting you chances of landing a big matching cluster. The diamond is the game’s scatter symbol. Landing 3 or more diamonds anywhere on the same spin triggers the Free Games Bonus feature. The more diamonds, the more initial free spins:

Before the start of the free spins, the Wheel feature applies as you spin a bonus wheel. Depending on where the pointer lands, you could add another 2, 3, 5 or 50 extra free spins to your total. You could also land 1 of 3 jackpot prizes:

There’s also a ? segment which awards a mystery prize which could be any of the prizes listed above. You’ll go on to start the free spins when the pointer lands in the Start segment of the bonus wheel.

In once, wilds that land come with 2x and 3x multipliers attached which double or treble the payout when they form part of a winning combination. Land more than 1 multiplier wild in the same winning combination and their values are combined to give an even bigger boost.

In some territories (but not the UK), you’ll have the chance to buy the Free Games Bonus feature. This costs 75 x your total bet. You’ll receive 5 free spins and play with a 96.7% RTP rate.

Importantly, the Expanding Reels feature can trigger but each reel can contain 8 symbols each. If all 6 reels have 8 symbols each, you’ll play with 262,144 ways to win.

WMS hasn’t tried to re-invent the wheel with the Raging Rhino Rampage slot. We’ve seen a similar combination of game engine and features in other slots.  The 4,096 ways to win plus the free spins with wild multipliers is a potent enough offering though.

The difference from the original slot is the addition of the Extending Reels feature which gives you more ways to win. In the UK, the most number of ways to win you can play with is 46,656. It’s only using the Buy Pass feature where 262,144 ways to win is possible. It would have been ideal that this advertised number was available via the bonus features and not the buy option.

The safari theme remains popular with developers and slots players alike. If you want more African adventures, the Buffalo Blitz 2 slot by Playtech also offers an increasing number of ways to win. You could also try the Spartacus Megaways slot (by WMS) where there’s an Expanding Wilds feature which can give you up to 1 million ways to win.

What is the Raging Rhino Rampage RTP?

What is the Raging Rhino Rampage max win?

The biggest possible win in the Raging Rhino Rampage game is 12,500 x your total bet. Your chances increase with the Extending Reels feature as you can play with up to 262,144 ways to win.

Is there a Raging Rhino Rampage free spins feature?

Yes, trigger the Free Games Bonus feature and you’ll start with up to 20 free spins. The Wheel feature then sees you spin the wheel to win up to 50 more free spins or a jackpot prize. During the feature, you can also win additional free spins, with no limits. There are also multiplier wilds up to 3x which can combine.

No. You can win a fixed jackpot up to 2,500 x your total bet in the Wheel feature which comes into play before the Free Games Bonus feature takes place.