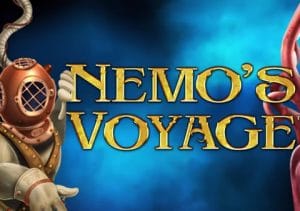 WHERE TO PLAY Nemo’s Voyage SLOT

Join a heroic submarine captain on a quest for treasure beneath the waves in Nemo’s Voyage. This 5 reel, 40 payline underwater adventure comes wild multipliers, pressure wilds, clumped wilds and wild reels. There also a bonus feature that offers 8 free spins with sticky wilds. Start your journey from between 40p and £200 per spin.

WMS has created an impressive looking slot – there’s no playing card filler here and all the symbols have a nautical theme. They include spears, treasure maps, sextants, a trio of fish and Captain Nemo himself. The 2 top paying symbols are the deep sea diver and tentacled sea creature. These two can appear as stacked and fill the entire reel in which they appear. The reels spin to an atmospheric soundtrack that certainly enhances the nautical theme.

Nemo’s Voyage is all about the wilds which get more and more impressive the longer you play – you’ll notice a meter on the right hand side of the reels. The Nautilus sub works its way along this meter the more you spin and is helped along the way when the increase pressure symbol lands on reel 5. Land a decrease pressure symbol though and you’ll head closer to the surface.

There are 4 different ‘milestones’ to pass as it makes its journey to the ocean floor. As it passes each 1, that feature is locked, starting at the quarter mark with the multiplier wilds which are added to the reels and can double or even treble winning paylines in which they appear.

Make it past half way and pressurized wilds come into play – when these wilds hit, all the other symbols below the wild on that reel will turn wild too.

Get three quarters of the way down the clumped wilds arrive – when this happens, a number of adjacent symbols on reels 2 through 5 will also turn wild.

Make it all the way to the sea bed and you’ll be rewarded with wild reels. When these are in play, between 1 and 3 reels will turn wild on every spin. They substitute for every symbol bar the bonus.

Land that bonus symbol on the odd numbered reels and you’ll trigger the Free Spins feature and be awarded 8 free spins. Look out here for the octopus’ tentacle which reaches out onto the reels and turns random symbols wild. These will remain in place (i.e. sticky) for the remainder of the feature.

On the volatility scale, Nemo’s Voyage is in the medium range. The feature isn’t the easiest to trigger but can deliver some solid payouts. The base game payouts are pretty steady too so you should see your bankroll sink too quickly in a succession of winless spins.

Nemo’s Voyage is certainly a little different from your common or garden underwater themed slot. The meter with changing wilds is a nifty little feature. Make it all the way to the ocean floor and there are decent opportunities to discover some hidden treasure. If you like underwater slots, Novomatic’s Lord of the Ocean is highly recommended.