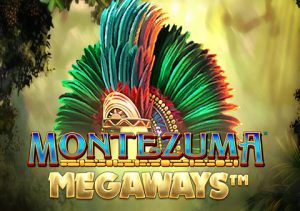 WHERE TO PLAY Montezuma Megaways SLOT

The jungles of a lost Mexican civilisation is the setting for the Montezuma Megaways slot game. Created by WMS using BTG’s game-changing game mechanic, it’s a 6 reel, video slot where the number of ways to win can reach 117,649. Also on offer are respins, multipliers, cascading reel wins and a free spins round with various ways to expand the multipliers. Start your quest from between 20p and £20 per spin.

Head to the central American jungle

The central American jungle is the setting for Montezuma Megaways. On the bright orange reels, you’ll see A to 10 playing card symbols alongside an Aztec dragon emblem, a mask, a headdress and a tribal princess. The Aztec warrior is the most lucrative symbol. He pays 1.5, 2.5, 3.5, 5 or 50 times your total bet if you land 2, 3, 4, 5 or 6 in combination. The Aztec pyramid is the wild. As usual, this replaces everything bar the scatter.

Like many Megaways slots, Montezuma Megaways uses the Cascading Reels feature. Land a winning combination and the successful symbols are removed and new ones drop in from above and replace them. These keep on coming until there’s a cascade where no new winning combinations are created.

Following a losing cascade, you could randomly trigger the Montezuma Respin Wheel feature which gives you a free respin in the hope you land a winning combination which then can trigger successive wins.

Land 3 or more scatters on the same spin and you’ll activate the Free Spins Bonus feature. Again, wheels are central to the action. Spin to reveal how many free spins you’ll receive, up to 25. Each successful cascade win increases a multiplier by 1x (with the Unlimited Win Multiplier feature).You can trigger the Montezuma Respin Wheel feature following an unsuccessful free spin.

Land 2 scatters during the free spins and you’ll get a spin of the Montezuma Multipliers feature which can give your winning chances a big boost – a multiplier up to 100x will be added to your current multiplier.

Land this on your final free spin (to trigger the Mega Win Multiplier feature) and your total win from the feature is boosted by a multiplier up to 25x!

Each time you trigger the Free Spins Bonus feature, you’re guaranteed to win at least 30 times your bet (known as the Bonus Guarantee feature).

The Megaways game mechanic has been hugely popular with players and it’s easy to see why. Montezuma Megaways is another very playable release. It’s not the most visually stunning slot but it does the job well enough. The extras in the free spins round are what make it a tempting proposition and make it stand out from other Megaways titles.

With variance in the medium to high range and with an RTP of 95.92%, you can win up to 12,500 x bet on every free spin if you get lucky with the multipliers.

If you’ve enjoyed previous Megaways slots, then Montezuma Megaways should certainly pique your interest. The other game I would suggest would be Raging Rhino Megaways which was WMS’ first slot using the popular mechanic.