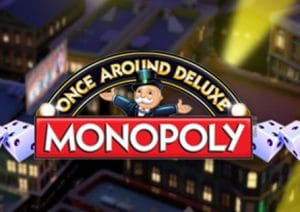 Monopoly Once Around Deluxe: Demo

WHERE TO PLAY Monopoly Once Around Deluxe SLOT

Games of Monopoly around the kitchen table conjure up images of arguments, tears and tantrums. Now you can enjoy the classic board game without the inevitable rows by playing Monopoly Once Around Deluxe, a 5 reel, 15 payline video slot from WMS. Trigger the bonus feature and work your way around the famous board to win some potentially big prizes. Try and become a property baron from between 15p and £75 per spin.

As you’d expect from a video slot based on 1 of the world’s most popular board games, Monopoly Once Around Deluxe is a pretty glossy affair – all the symbols relate to the game. Look out for taps (water company), light bulb (electric corporation), the free parking car and a train. There’s also a ring as well as the boot, puppy dog and car counters.

The mustachioed Rich Uncle Pennybags is the game’s wild and by far the most lucrative payer – 5 of these on a payline award a bumper haul of over 1,300 times your total stake (at the minimum stakes of 15p per spin, you can win £200!).

The Chance and Community Chest symbols are scatters – land 5 of these anywhere on the reels and you can look forward to a payout of 200 times your total stake.

The game comes with 1 main bonus feature, the Once Around Deluxe feature, which is triggered by landing 3 or more of the Bonus symbol (Rich Uncle Pennybags with a pair of dice). Then choose a token – your goal is to work your way around the iconic board. Just like in the board game, you do this by rolling dice.

Cash prizes of varying sizes are awarded depending on which square you land on – hope to avoid Go to Jail/Just Visiting, Income Tax or Super Tax though. Potential bonus prizes are on offer if you land on Chance or Community Chest squares.

No money is awarded for landing on the Go square but you will trigger the Twice Around feature – this gives you a second trip around the board. All prizes on this second lap of the board are boosted by a 2x multiplier and doubled.

The game also comes with a side bet feature which allows you to build properties on specific addresses. If you then land on a square with a property when going around the board, the prize will increase. You can build up to 5 properties on each square (4 houses and a hotel).

If you land on a square with 5 properties built on them, you’ll receive 5 rent payouts. Just like in the game, it costs more to build on Mayfair than on the Old Kent Road. The rewards are that much bigger if you do then land on the developed square. Prizes range from between 3 and 180 times your total bet.

Fans of the board game will find plenty to tickle their fancy here. Even if the thought of a live game of Monopoly brings you out in hives, the video slot version, with its big potential payouts, is a far more enticing prospect. I also recommend you try Super Monopoly Money by WMS which is just as good.