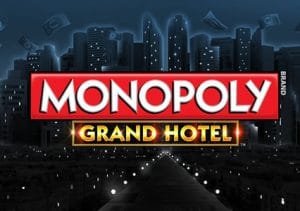 WMS has once again taken inspiration from the world’s most famous board game to create Monopoly Grand Hotel. Played using a 5 reel, 50 payline game engine, this medium volatility game comes with instant cash bonuses, 4 potential jackpot prizes that can reach 1,000 times your bet as well as a free spins round where every Free Parking car that hits awards an extra bonus prize. Play on your computer, tablet or mobile from between 25p and £200 per spin.

Like the other video slots in WMS’ Monopoly franchise, there’s a shiny look to the design here. Set against a backdrop of coins and cash, you’ll see lower value A to J symbols spinning around the reels alongside dices, a ship, a plane and a sports car. The most rewarding symbols are the Scottie dog and the free parking car.

These both offer awards of up to 5 times your total bet per line. Appearing everywhere apart from reel 1 is the portly Mr Monopoly who is the game’s wild. There’s a good range of features on offer Monopoly Grand Hotel.

Go feature – land 3 of the Go scatter symbol on the same spin and you’ll activate the Bonus Reel. You’ll then get 1 spin. This can then deliver instant coin wins of up to 20 times your bet, 1 of 4 jackpot prizes which pay 10, 25, 100 or 1,000 times your bet or a free spins trigger with 6 free spins.

The Go isn’t the only extra symbol. You’ll also see the famous green house and red hotel spinning around the reels in the base game. These house and hotel symbols come with cash values attached. That becomes important when you trigger the Free Games feature.

To do that you’ll need to land 6 or more combined house or hotel symbols on the same spin. You’ll then receive 1 free spin for every triggering symbol (between 6 and 15). All the cash values from the house and hotel symbols from the triggering spin are added together – this can be as high as 375 times your bet!

This amount is paid out every time a Free Parking Car hits during the feature. A big haul from the triggering spin can deliver some big bonus results. You can retrigger more free spins too – you can retrigger the feature up to 15 times resulting in a potential 240 free spins.

Some of WMS’ Monopoly video slots have left us rather underwhelmed. Many of them are overcomplicated. They’ve got the balance pretty much right here though. Visually it’s well constructed. The features stack up pretty well too. Put all that together and you have a solid all-round game. If you’re tempted by this franchise, then Monopoly Grand Hotel is a pretty good place to start. I would also try WMS’ Super Monopoly Money which is still a classic.