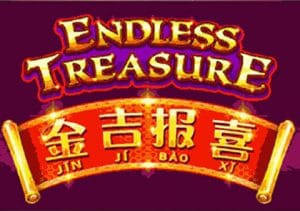 Jin Ji Bao Xi: Endless Fortune is a rather complicated 5 reel, 243 ways to win video slot from WMS. It comes with free spins with added higher value symbols, instant win Fu value prizes as well as offering a chance to land 1 of 4 jackpots. Play on all devices from between 8p and £88 per spin.

There’s a classy look to the design here. On the reels you’ll see lower value A to 9 symbols as well as a selection of stylised symbols featuring animals associated with China. They include a turtle, tiger, phoenix and dragon which pay 20 coins if you land 5 on adjacent reels.

To the left of the reels you’ll see a meter. Increase your stakes and you can turn the standard animal symbols into their higher paying gold equivalent. Having 1 gold symbol in play will set you back the standard 8 credits. You can up the golden symbol numbers in play up to 2, 3, 4 or 5 at a cost of 18, 38, 68 or 88 credits.

The top paying gold symbol awards 250 rather than 20 coins for a 5-symbol combination. There’s also a wild that substitutes for everything apart from the scatter when it hits on reels 2, 3 and 4 in the base game. WMS has packed in plenty of extras here.

Golden Chance feature – if the wild lands on reel 3 in the base game, you could see all of the standard animal symbols turn into higher paying gold animals. Any wins here also come with a 2x multiplier.

Fu Value feature – each bonus symbols comes with a Fu value attached. This can be anything from 1 right up to 11 times your total bet. The precise number depends on how many gold symbols you have in play. When the bonus symbol lands, the Fu value is added to the pot above the reels. The amount in the pot is awarded when you play the Free Games feature.

Free Games feature – that free spins round is triggered by landing 6 or more bonus symbols on the same spin. You’ll then receive 6 free spins. Before they start, you’ll get to choose 1 higher value gold symbol. Extras of this symbol appear during the free spins alongside the lower value royal values and a yellow coin which is wild.

Landing 3 yellow coins adds another 3 free spins to your total. This also adds to the Fu meter. At the end of the round, the Fu meter totals are added to whatever you won from the free spins.

Top Up feature – this is a variation on the streak spin. The bonus symbols from the triggering spin, complete with their Fu Value, are held. The reels spin again. What you’re hoping to see here are yellow and green coins.

Each yellow coin awards the total Fu value amount from the triggering spin. Land a green coin and it will be worth the accumulated amounts from all the other coins on display. That includes the triggering spin and the free spins. A +1 symbol adds another spin to your total. Fill the whole screen with coins and you’ll land the Grand Jackpot.

Jin Ji Bao Xi feature – this jackpot round can also trigger at random. You’ll then be offered the pick of 12 coins. Keep picking until you find 3 that match. There are 4 potential jackpots here – Mini, Minor, Major or Grand. The latter is worth £2,000 if playing using 5 Gold symbols (88p per spin).

This is one of the most complicated video slots we’ve ever played. We strongly recommend having a good look in demo mode before you shell out your hard earned. The Fu values and the Top Up feature take some getting used to. Once you have become accustomed to the unusual and rather complex features, there’s plenty to like here.

Jin Ji Bao Xi: Eternal Treasure has been a popular land-based casino video slot. This online version has its moments too. It certainly takes some getting used to but once you have there’s some decent action on offer on this Chinese-themed offering. It can reward you to the tune of 30,999 times your total bet! If you like Chinese themed video slots, there’s plenty about – such as Quickspin’s Eastern Emeralds.