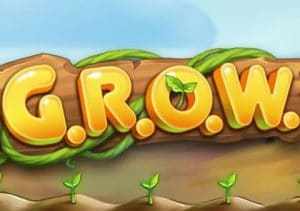 WHERE TO PLAY G.R.O.W SLOT

Harvesting barrows full of coins is the name of the game in G.R.O.W, a gardening-themed video slot from WMS and Red 7. Played using a 5 reel, 10 row, 50 payline game engine, it comes with mystery symbols and free spins. If the beanstalks reach the top of the reels, they can unlock 1 of 4 treasure chests and some big cash prizes. Stakes here range from between 50p and £200 per spin.

G.R.O.W uses a 5 reel, 10 row, 50 payline game engine. Set against a cartoon-style rural backdrop, the reels include honey, strawberry, broccoli and onion symbols (in the shape of playing card suits) as well as a trowel, gloves and a bottle of fertiliser. The wheelbarrow is the best standard symbol. This pays 0.8, 1.4 or 3 times your bet if you land 3, 4 or 5 in combination.

The ? is the mystery symbol. All examples of these that appear on the same spin morph into the same matching symbol. Mystery symbols can also turn into wilds in the base game.

Pollinate your prizes with Golden Bees

Like the G.R.O.W symbol, the Golden Bee is a scatter symbol that also acts as a wild. Each time a Golden Bee lands, a prize worth double to your total stake is added to the associated treasure chest above the reels.

Land 3 or more Bonus symbols on the same spin and you’ll receive 10 free spins in the Free Spins feature. These take place on a new set of reels. The wild can land in its own right here as well as via the Mystery Symbols. You can also win 10 additional free spins to take your total to 20.

G.R.O.W is a light-hearted video slot. The cartoon visuals are simply done, backed by a bouncy backing track. There’s a decent selection of extras on offer here. Saying that, the most you can win is a mere 200 times your bet if you fill the reels with wilds – it’s all about getting big cash prizes from the Beanstalk Treasure feature which have reached over 2,000 times my bet. For a more cultivating experience, NetEnt’s Flowers is better in terms of max win potential.