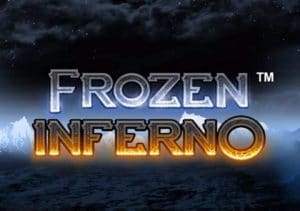 WHERE TO PLAY Frozen Inferno SLOT

Frozen Inferno is a 5 reel, 40 payline video slot from WMS Gaming that is available to play across compatible desktop, mobile and tablet devices from 40p to £200 per spin. With a gothic feel, it’s based on sorcerers with 2 modes – Frozen or Inferno.

Aesthetically, the game looks fantastic. You need to decide firstly which mode you play in – this has an impact on the visuals for starters. Frozen is predominantly blue whilst Inferno is mainly red. In terms of the symbols, they are exactly the same in both modes – you will see crystal balls, bracelets, rings, scrolls, skulls, castles and pendants.

Frozen Inferno is the 2nd video slot from WMS Gaming that uses the EFX Phantom game engine – it’s therefore something different which introduces you to the Persistent Bonus as wilds remain on the reels from spin to spin.

In the Frozen mode, you will see 1 ice symbol in the middle of the middle reel which is ‘frozen’ in place – more wild symbols can land in subsequent spins which also remain frozen. Only 1 wild can land on each spin. You can only have a maximum of 4 wilds at any 1 time before you get a bonus symbol which then triggers the Free Spins feature.

In the Inferno mode, 1 fire wild is added in the center of the middle reel. This wild is a roaming wild which moves up, down, left or right randomly after each spin. More fire wilds can appear with a maximum of 4 fire roaming wilds on the reels. When you get a bonus symbol, you will enter the Free Spins feature.

The Free Spins feature starts with no wilds on the screen with each reel having its own individual mode (Frozen or Inferno) – both ice and fire wilds can appear on the reels at the same too. When you have a winning free spin, 1 reel will change to the opposite element starting from the leftmost reel (reel 1).

Once all 5 reels change to the opposite element, the feature will end. Basically, you are guaranteed 5 winning free spins with both fire and ice wilds on the reels.

Frozen Inferno may sound a little complicated but it soon becomes quite simple once you start spinning those reels – I think WMS has released a great game here which is innovative and unlike anything else online right now. 5 winning free spins may sound a little stingy but the potential for huge wins with both fire and ice wilds is good. The variance is medium to high so patience is required. I also recommend you check out WMS’ other EFX Phantom game, Nemo’s Voyage, which is superb.