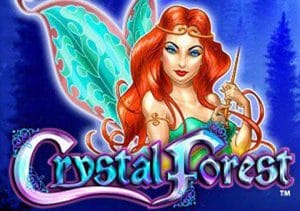 WHERE TO PLAY Crystal Forest SLOT

A dusky and mysterious woodland is the setting for Crystal Forest, a 5 reel, 25 payline slot powered by WMS Gaming. The magical creatures found there can help you to some fine rewards thanks in large part to the cascading reels which offer multiple re-spins and a bonus feature where you can win up to 50 free spins. Play from between 25p and £125 per spin.

The visuals in Crystal Forest are nicely done – look out for an assortment of lower value wreaths, bottles, lanterns and wands alongside mid-range rabbits, toadstools and flowers. The higher value symbols are the fairy, unicorn, ladybird, butterfly and mushroom. What’s interesting about the high value symbols is that they can deliver a payout when combined. So for example, if you landed 1 of each in the same payline, you could still expect a payout of 500 times your line bet.

There’s also a standard wild which does exactly what you’d expect it to when it lands on reels 2 through 5. It can also land as a stacked wild. There’s also the jackpot symbol which delivers the top payout of 750 times your line bet for a 5 symbol combination.

Crystal Forest uses Cascading Reels technology. After every successful spin, the winning symbols will magically disappear to be replaced by the ones directly above. If a new winning combo is on show, a further cascade follows. These continue until the reels don’t reveal a winner.

Keep track of how you’re doing via the cascades meter on the left hand side of the reels. The free spins play out on a new set of reels, complete with a lovely, chilled out backing track – the cascades are in play during the feature too so you can expect even more action there.

What you make of Crystal Forest will largely come down to whether you like slots with cascading reels. On the plus side, they provide plenty of base game action. The negative here is that gargantuan wins are pretty unlikely as the variance isn’t especially high.

The cutesy, fantasy theme won’t be to everyone’s taste but if you are looking for some mystery and magic, the Crystal Forest can deliver some enchanting entertainment. If you like the Cascading Reels feature, Invaders from the Planet Moolah from WMS is a good alternative. You also have Gonzo’s Quest from Net Entertainment which uses a similar concept called the Avalanche feature.