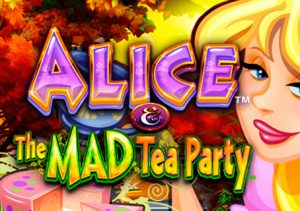 WHERE TO PLAY Alice & The Mad Tea Party SLOT

Alice and The Mad Tea Party is a 5 reel 30 payline video slot powered by WMS. This game guarantees a super mad spinning experience as it’s based on the children’s storybook (Alice in Wonderland). Take your seat at the tea party in this epic and magical adventure as they are 7 unique features to uncover. You can play from 50p to £100 a spin.

In the base game you have the Super Mad Respin feature which is triggered by getting 3 Alice symbols on reel 1. You then get to select from 3 teapots which will reveal the following:

Alice symbols act like wilds in this feature and wild symbols will change into Alice symbols – these too will remain in place during the feature. Any Alice symbol that appears on reels 2-5 that triggers the feature will be held too. In total, you can get up to 7 respins.

Then you have the Alice feature which is triggered randomly in the base game. Alice will change between 1 and 5 reels into a wild reel. This for me is one of the better features due to the win potential. Can you imagine 5 wild reels? There’s the Cheshire Cat feature which also appears randomly and changes 1 to 10 reel positions into a Cat wild. 10 wild symbols can also prove quite fruitful.

The Queen feature is triggered randomly where you pick a card to reveal a spade, club, heart or diamond to award you with a cash prize. Everywhere the chosen symbol appears on the reels changes to the Queen wild and can reward you with up to 250 times your stake. You have the Caterpillar feature which again is triggered at random. It will award you with a multiplier between 2x and 15x of your stake.

The best feature is the Mad Tea Party Free Spin feature which is triggered by getting the Feature symbol on reels 1, 3 and 5. You are awarded 6 free spins but before each free spin, you need to select a teapot above the reels. They can reveal multipliers, turn spade/club/diamond/heart symbols wild or award you the Super Mad Respin feature. In total, you can get 7 free spins but you can get a 3x multiplier on each spin. You can also gain additional free spins if you get the feature symbol on reels 1, 3 and 5 too.

Alice and The Mad Tea Party is a very entertaining slot but I’ve found my biggest wins have come from the free spins feature or the Alice feature. The latter gave me 4 fully wild reels the first 2 times I triggered it which was great. The graphics, sounds and animations are simply brilliant. I found it to be a low variance game and despite it being very entertaining, I recommend you play other WMS slots such as Wizard of Oz Ruby Slippers or Black Knight II.