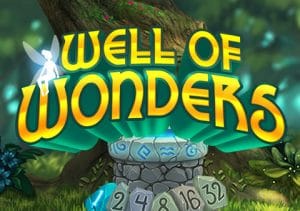 WHERE TO PLAY Well of Wonders SLOT

Drop a coin into the water and see if your jackpot dreams will come true in Well of Wonders, a highly unusual video slot from Scandi developer Thunderkick. The game is playable from as little as 10p to as much as £100 per spin across all the usual devices like iOS, Android and laptops/PCs.

On each spin, stones will float onto 7 reel positions. 3 or more of the stone same creates a winning combination. Look out here for re-spins following a winner, complete with expanding multipliers that can boost your payouts by up to 32x.

A dense woodland scene, complete with a wishing well in centre, forms the backdrop to the 7 symbol positions. There are 9 symbols in total – 8 gemstones plus a wild. Land at least 3 matching symbols to create a winner. The most rewarding of them is the circular red symbol which offers payouts of 50 times your total stake if you land 7 of them on the same spin.

Following a successful spin, the winning symbols are removed and replaced by new ones. You’ll also be awarded a re-spin. If that re-spin results in a winner, your payout will be boosted by a 2x multiplier and doubled and another re-spin awarded.

These re-spins continue as long as a new winning combination is created – more importantly, each successive win also doubles the expanding multiplier until it reaches a maximum of 32x! You can keep tabs on just how high the multiplier has got by checking the wishing well in the middle of the screen.

Watch out for the fairy too who can appear at random on any spin – with a wave of her magic wand, she can remove all of the single symbols from the reels and award a re-spin and a subsequent increase in the multiplier.

There aren’t any traditional features like free spins, cash trails or pick’em bonuses here. All the action centres on the re-spins. Thankfully the doubling multipliers keep the pace flowing nicely and with 32x, boosts the coins can really start to flow if you get on a winning roll – up to 2,280 times your bet on each spin!

As we’ve come to expect from Thunderkick, the design here is top drawer – combine the lush visuals with some very unusual gameplay and the Well of Wonders can certainly live up to its name and deliver some highly enjoyable action. I also recommend Esqueleto Explosivo, also by Thunderkick, which also offers big multipliers.