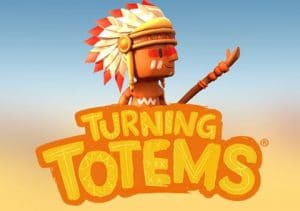 WHERE TO PLAY Turning Totems SLOT

Head to the desert in Turning Totems, a superbly designed Native American themed video slot from Scandi developer Thunderkick. Available to play on desktop, tablet and mobile devices, it’s a 5 reel, 11 payline game that’s played using a win both ways game engine. Goodies on offer include wild reels, re-spins and a free spins feature. Play from between 10p and £100 per spin.

Thunderkick is one of the developers that has helped revolutionise the design of slots and Turning Totems is a case in points – it looks stunning. Set against a canyon backdrop, the reels are made up of 5 totems poles. Instead of spinning vertically, the symbols spin horizontally on each spin. There are 6 ornately designed totem masks in all. Watching over proceedings is a miniature, Lego style Native American to the left of the reels.

Look out for the Thunder Snake symbol – whenever this lands, it will turn that reel wild. You’ll also be awarded a re-spin with the wild frozen in place. Here you’ll need to keep an eye on the brown, bird face which is the lowest value symbol. This is usually a sleeping wild but gets awoken on re-spins and becomes an active wild. Any Thunder Snake symbols landing on other symbols award another re-spin.

If you manage to turn 3 reels into wild Thunder Reels, you’ll trigger the Bonus Game feature and be awarded 5 free spins. The Thunder Reels are in play on each free spin, giving plenty of chances to land extra wilds and increase your winning chances. The Thunder Snake can hit here too to offer more opportunities.

We’ve said it before and we’ll say it again – this is a beautifully designed slot. The visuals are terrific and the hypnotic soundtrack a perfect match for the theme.

If you’re expecting volatile action though, you may be a little disappointed. The variance here is on the low side. Expect small wins in the base game. Things can pick up in the feature but you’re unlikely to be winning mega jackpots here.

If you don’t mind the low variance, there’s plenty to like. Firstly, you’ll get plenty of play for your money. The simple gameplay has its charms too. And of course, the design terrific. There are wins of 998 times your stake on offer on each free spin – you just need to be very lucky to get near that.

Newbies looking to dip their toe in the slots world or experienced players wanting sedate, soothing action are well catered for here. It’s unlikely to make you masses but Turning Totems remains a playable offering from Thunderkick. I also recommend you try Babushkas (from Thunderkick) which is superb and unique.