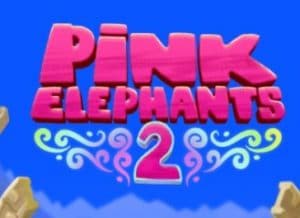 WHERE TO PLAY Pink Elephants 2 SLOT

One of the stranger slots we’ve played over the past couple of years was Pink Elephants. These wild mountain animals are back for a second outing in the Pink Elephants 2 slot. Created by Thunderkick, this 6 reel, 4,096 ways to win sequel comes with classy, cartoon-style design as well as a bonus round that awards free spins with symbol upgrades. Find out what else this volatile slot offers in our in-depth Pink Elephants review.

Like the original release, Thunderkick has kept things relatively simple on the gameplay front in Pink Elephants 2. The game isn’t overloaded with features and bonus rounds. The limited range of extras can deliver a knockout payout punch though. The main bonus is the free spins round with symbol upgrades.

Joining the standard scatter symbols is the Mystery Scatter. Between 1 and 5 of these can land at random on any base game spin which can certainly boost your chances of triggering the Bonus Game feature.

The Bonus Game feature is activated by landing 3 or more scatter symbols anywhere on the reels on the same spin.

During the free spins, elephant orbs are collected in special meters. Once a meter is filled, a medium value symbol is upgraded to the next most valuable symbol for the remainder of the round.

If you manage to fill all the meters, all the mid-value symbols transform into the most rewarding pink elephant symbol for any free spins you have left.

The action in Pink Elephants 2 takes place on a 6 reel, 4,096 ways to win game engine. Winning combinations are formed by landing matching symbols on consecutive reels, starting from the leftmost reel.

Stakes range from between 10p and £100 per spin as do all Thunderkick slots.  You can set up autoplay by clicking on the arrows button in the bottom right-hand corner of the screen. This will run for between 5 and 100 successive spins. You’ll also have the option to set win and loss limits as required.

The theme here might be cuddly looking goats and elephants but don’t be fooled into thinking that this is a gentle slot. It’s certainly not. The Pink Elephants 2 volatility is very high. This is a high variance game. In the original, the maximum win was around 8,200 x bet. That’s been ramped up to 10,000 x bet in the sequel. The RTP is 96.13% which is a little on the low side but not too bad. There’s an almost prehistoric feel to the design in the Pink Elephants 2 slot. With grazing lands and mountains (the Himalayas) in the background, the reels are made up of lower value stone symbols that have been embossed by A to 9 royal values.

More rewarding are the 4 mountain goats. The most lucrative symbol is the Pink Elephant of the title. Land 2, 3, 4, 5 or 6 of these in combination and you’ll win a payout equal to 1, 2.4, 4.5, 6.5 or 10x your total bet. The W is the game’s wild. This substitutes for all the standard symbols when it makes up part of a winning combination.

The animal imagery is very nicely drawn in the Thunderkick house style, which, as usual, is very easy on the eye. Thunderkick’s game interface is straightforward. You can set stake levels and autoplay from the game screen. The paytable is detailed and covers everything you’ll need to know.

The Pink Elephants 2 mobile slot is available on Apple and Android devices. The crisp visuals and simple gameplay are perfectly fine on the smaller devices.

Of all the slots crying out for a sequel, Pink Elephants wouldn’t have been at the top of our list. Thunderkick thought otherwise and have created a playable enough volume 2.

The design in Pink Elephants 2 is just what we’ve come to expect from a slot from Thunderkick. The colourful visuals are packed full of detail and are very easy on the eye. Regardless of the theme, they don’t make ugly slots.

The gameplay in Pink Elephants 2 is similar to what’s on offer in the original. It’s not brimming with extras but the free spins round can deliver some decent action if you manage to get on a decent run with the symbol upgrades. Furthermore, it’s not the most innovative slot you’ll play. But it’s volatile though. If you enjoyed the animal antics in the original, expect of the same high variance action in the rather bizarre Pink Elephants 2.

❓ What is the Pink Elephants 2 RTP?

The Pink Elephants 2 return to player rate is 96.13%. For every £100 wagered, on average £96.13 is returned in winnings. This is middle of the road for an online slot game – anything above 96% is acceptable. The variance is high so 1 big win can offset lots of smaller ones

🥇 What is the Pink Elephants 2 slot volatility?

The animals here might look cute and cuddly but Pink Elephants 2 is a surprisingly volatile slot. The variance here is high offering high risk, but potentially high reward action. The key to big wins come in the Bonus Game feature where mid-value symbols transform into the higher paying elephant.

🎰 What is the Pink Elephants 2 maximum payout?

It’s possible to win up to 10,000 times your total bet in the Pink Elephants 2 slot. The original (Pink Elephants) offers 8,200 x bet payouts so it’s been upgraded. You’re more likely to win big amounts in the free spins as medium-value goat symbols can transform into the highest paying symbol, the Pink Elephant.

⚡ What are the Pink Elephants 2 bonus features?

The main feature in this 6 reel, 4,096 ways to win slot is the Bonus Game feature where you’ll play between 7 and 19 free spins initially. Collect symbols in meters for symbol upgrades which remain in play for any free spins you have left. Re-triggers are possible here too.