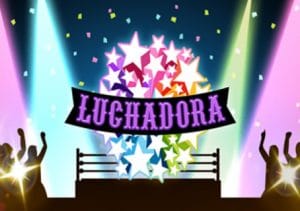 WHERE TO PLAY Luchadora SLOT

Put on your mask and jump into the ring in Luchadora, a Mexican wrestling-themed video slot from Thunderkick. Featuring the developer’s trademark high-end design, this 5 reel 30 payline game comes with transforming wilds and a bonus round that awards free spins where up to 4 different symbols can become wilds. Join the contest from 10p to £100 per spin.

As usual with a Thunderkick-powered video slot, the visuals in Luchadora are top notch. Joining the lower value green, yellow, orange and red chilli symbols are a quartet of wrestlers. The line-up includes El Pantera who pays up to 15 times your bet, El Serpiente who awards up to 17.5 times your stake and El Rayo who offers up to 20 times your bet.

The best of the wrestlers is El Toro – land 5 of ‘The Bull’ on a payline and you’ll pocket a champion prize equal to 25 times your stake. Joining the main men is an underdog known as Misterioso Campeón – he awards up to 5 times your bet in the base game but can spring into life during the feature round.

In the 4 corner positions on the reels, you’ll see a golden square. Hope to see a wrestler land in 1 of those squares and you’ll trigger the Ring Corner feature. If a wrestler lands in any of the corners, he’ll turn wild, as will all of the matching wrestler symbols elsewhere on the reels.

Those same free spins can be triggered by landing 3, 4 or 5 of the Lucha Bonus symbol (the champion’s belt) anywhere on the reels on the same spin. It’s known as the Lucha Bonus feature.

The wrestlers get even stronger during the feature – if they land in one of the 4 corner symbols they will turn matching symbols wild. That wrestler symbol will then become a wild whenever it lands during the rest of the free spins.

If the Lucha Smackdown bell symbol lands during the feature, a cash prize of up to 15 times your bet and 2, 3, 5 or 7 extra free spins can be added to your tally.

Thunderkick has once again come up trumps with Luchadora, combining top class visuals with an innovative feature round. Turn those wrestlers into wilds and some top action can be had here. Wrestling isn’t one of our favourite sports. That doesn’t really matter in Luchadora though. With its classy design and impressive bonuses, it’s a very playable game whether you’re a fan or not.

If you are a fan of all things Mexican, then we’d point you in the direction of Esqueleto Explosivo, also from Thunderkick, which is excellent.