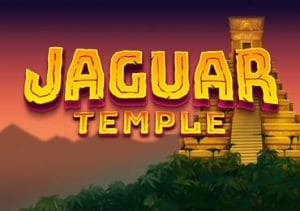 WHERE TO PLAY Jaguar Temple SLOT

Go back to the age of the central American Mayan civilisation in Jaguar Temple, a vibrant release from Thunderkick. Played using a 5 reel, 20 payline game engine, this colourful game comes with colossal 3×3 symbol blocks and a re-triggerable bonus round where you can win up to 40 free spins with expanding wilds. Play from 20p to £100 per spin – across all devices of course.

Like most video slots from this developer, there’s a glossy feel to the design in Jaguar Temple. The action takes place within the remnants of a stone temple structure. You’ll see heart, diamond, club and spade symbols alongside primitive versions of birds, rabbits, dog and fish. The jaguar is the most rewarding symbol. A 5 in a row combination awards 50 times your bet.

You don’t need to start a winning combination made up of the jaguar from reel 1 either – as long as 3 appear adjacent to each other you’ll pocket a payout. The jaguar can also appear in colossal 3×3 blocks which can fill the whole of the middle 3 reels.  Helping to create the winners is the wild.

Jaguar Temple comes with a single bonus extra – the Bonus Game feature. It’s triggered by landing 3 or more scatters on the same spin. Depending on the number of scatters on the triggering spin, you can look forward to 10, 15 or 20 free spins.

Spicing up the feature are expanding wilds. These turn the whole of a reel wild whenever they hit. You can also expect to see the colossal jaguar symbol blocks land more regularly during the feature than during the base game too. You can add more free spins to your tally too. 2, 3, 4 or 5 scatters on the same free spin will get you an extra 3, 10, 15 or 20 free spins.

Many Thunderkick video slots have a pretty outlandish theme. We’re thinking Babushkas, Barber Shop Uncut and Birds On A Wire. Jaguar Temple is pretty straightforward by comparison. The high spec design is present and correct and the features, while lacking originality, are perfectly solid. As far as volatility goes we’re in the medium range.

Jaguar Temple might not quite hit the heights of some of Thunderkick’s other video slots. It’s still a very playable and entertaining game though and well worth investigating – you can also win 2,045 times your bet on every spin too.