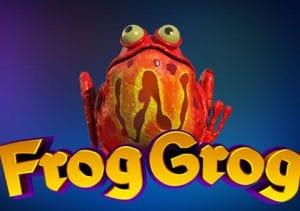 WHERE TO PLAY Frog Grog SLOT

Try and cook up a jackpot in a mysterious alchemist’s laboratory in Frog Grog, a 5 reel, 23 payline video slot from Thunderkick. Well designed as usual, it’s played using a symbol drop game engine where successive wins can deliver multiplier boosts of up to 7x. Trigger the feature and you’ll spin with only higher value symbols in play. Stakes on all devices range from between 10p and £100 per spin.

The setting here is a dimly lit laboratory full of candles, cages and conical flasks. The reels feature 6 different bottles of potion filled with eyes, hearts and plants. The most rewarding of them is the potion featuring the moth which pays 10 times your total stake if you land 5 on a payline.

The game is played using a Dropping Symbols feature – after a winning spin, the successful symbols are removed and new ones drop in to replace them. A new payout consideration is then made. These continue as long as a new winning combination is created.

Each consecutive win also brings a multiplier into play. This starts at 1x then rises to 2x, 3x, 5x and 7x. A spin without a win sees the multiplier revert to 1x. This is known as the Multiplier feature.

Keep a special eye out for the frog which is the wild – it replaces all other symbols. When it hits, the frog burps and in the process, clears away all the symbols on the same row and reel. The frog wild then locks in place. He’ll remain there until he forms part of a winning line. This is known as the Frog Burp feature.

Finally, the Mystery Game feature can be triggered at random following any winless spin. These spins are played using just the higher value moth, flower and wild frog symbols. The symbol drop engine is used and the multipliers from the base game are also in play.

There may not be any free spins on offer here but the symbol drop game engine delivers a steady stream of action. We didn’t find Frog Grog especially volatile but get on a roll, especially during the Mystery Game feature, and the multipliers can quickly do their stuff. There’s up to 1,616 times your bet to be won on each spin!

Frog Grog isn’t the most exciting video slot from the Thunderkick catalogue but it’s a perfectly solid game though. If you’re after simple, repetitive gameplay and classy design, you won’t go too far wrong here. I would suggest you try the volatile Pink Elephants and the iconic Esqueleto Explosivo.