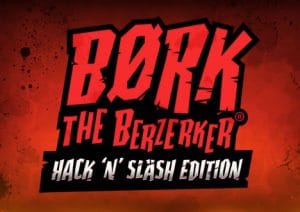 A Norse warrior trying to rescue a maiden from the clutches of a grotesque sea creature is the goal in Børk The Berzerker Hack ‘N’ Slash Edition. It’s a 5 reel, 20 payline video slot from Thunderkick that combines high spec, cartoon visuals with a couple of tasty extras. They include expanding wilds and free spins. Join the battle from between 10p and £100 per spin.

The eagle-eyed readers among you will recognise the name Børk The Berzerker – Thunderkick has indeed previously released a video slot of this name. The Hack ‘N’ Slash Edition offers a few little tweaks to the original game which no longer exists.

What is the same is the excellent design – the images are drawn cartoon style and though simple are very nicely done. You’ll see 3 Norse letter characters, 3 ugly sea monsters and a blonde-haired maiden. This mystery woman is the most lucrative symbol, paying 3, 7 or 50 times your total bet if you land 3, 4 or 5 in the same payline.

Helping to create those winners is Børk The Berzerker who is the wild – in the base game, he appears on the middle reel only. When he does land, he’ll expand to turn the whole of the reel wild and a new payout follows.

Things have the potential to get far more interesting in the Bonus Game feature though – to trigger that, you’ll need to land 3, 4 or 5 of the scatter (the purple-faced monster who’s about to strangle someone). You’ll then receive 10, 15 or 20 free spins.

Børk can really come into his own here – rather than just hitting on the middle reel like in the base game, the Berzerker can hit on reels 2, 3 and 4. Just like the base game, he expands to turn the whole of the reel (or better still reels) wild whenever he hits.

Thunderkick has kept things largely the same in this latest outing for Børk. The design, while not as flashy as some video slots in the Scandinavian developer’s catalogue, is still very easy on the eye. They just don’t make ugly games. The extras have been tweaked slightly too. The range isn’t wide but the expanding wilds can come into their own during the free spins round. The overall variance is in the medium to high range with potential payouts of 2,100 times your bet on each spin/free spin.