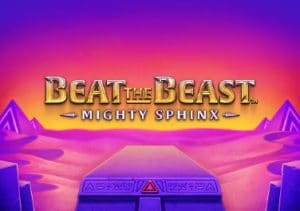 WHERE TO PLAY Beat the Beast: Mighty Sphinx SLOT

The deserts of ancient Egypt are the setting for the Beat the Beast: Mighty Sphinx slot, a 5 reel, 9 payline game from Thunderkick. Prizes of up to 4,444 x your total bet are up for grabs in this volatile Arabian adventure. Look out for special Sphinx symbols that act as both a wild and a scatter. As you’ll find out in our Beat the Beast: Mighty Sphinx review, triggering the Bonus Game feature can be very advantageous. You’ll receive 10 free spins to start with. Land a retrigger and you’ll get another 5 free spins. Each re-rigger also upgrades a mid-value symbol into a wild. Read on to find out what else you can expect from the Mighty Sphinx.

The gameplay in Beat the Beast: Mighty Sphinx is relatively straightforward. There are a few extras to note though, starting with Sphinx symbols that serve as both the wild and scatter. There’s also a free spins feature.

On any base game spin, you could see 1, 2 or 3 Sphinx emblem symbols added to random positions on the reels. This could help you land a winner or better still, boost your chances of triggering the Bonus Game feature.

To trigger the Bonus Game feature, you’ll need to land 3, 4 or 5 of the Sphinx Emblem symbol anywhere on the same spin. You’ll pocket a payout equal to 2, 20 or 200 times your bet before going on to play 10 free spins.

On each free spin between 1 and 3 Sphinx Emblem symbols are added to random positions on the reels. Land 3 or more Sphinx Emblems on the same spin and you’ll receive a re-trigger. That adds another 5 free spins to your total.

You’ll also benefit from the Symbol Upgrade feature. Each retrigger turns 1 of the mid-value symbols into a wild for any free spins you have left. It’s possible to transform up to 4 mid-value symbols. All those potential extra wilds can really get the coins flowing.

Rather than using paylines, Beat the Beast: Mighty Sphinx uses a bet ways game engine – it has 5 reels and 4 rows. To create a winning combination, you need to land matching symbols on adjacent reels, starting from reel 1 on the left-hand side. Each matching symbol on each reel counts towards a winner so it’s possible to create some big clusters of combinations. There are 1,024 ways to win here so there are plenty of chances to form a winner.

The base game uses a simple 5 reel, 3 row machine which offers 9 paylines. Stakes here start at 10p per spin, rising to a maximum of £100 per spin. To set you bet level, just click on the chip symbol beneath the reels and amend accordingly.

You’ll also have the option to set between 5 and 100 autoplay spins. Win, loss and stop of feature settings are available too.

The RTP of 96.14% is about average. The variance in Beat the Beast: Mighty Sphinx is as hot as the midday Saharan sun. This is an extremely volatile slot. Expect lengthy spells as arid as the desert. Get on a roll with the re-triggers during the bonus round though and the extra wilds can really get the action bowling along. The top win per spin or free spin is 4,444 x your total bet. Thunderkick’s reputation for creating some of the best designed content is well deserved. Beat the Beast: Mighty Sphinx is simply done but there’s the usual attention to detail and visual flair we’ve to come to expect from a Thunderkick release.

A purple-tinged desert sunrise forms the backdrop to the action on the reels. Those reels are set within an ornately crafted gilded frame. The lower value royals appear on stone blocks with the mid-range hieroglyphs set against the night sky.

You’ll see a Sphinx statuette, an ankh cross, scarab beetle and Khopesh sword. These are the 4 symbols that can upgrade into wilds during the free spins. Comfortably the top paying symbol is the mighty Sphinx. Land 2, 3, 4 or 5 of these in combination and you’ll receive an award of 1.5, 10, 50 or 250 x your bet. The symbols here are very nicely crafted. The graphics are sharply drawn and stand out nicely against the star-filled backdrop.

Beat the Beast: Mighty Sphinx uses Thunderkick’s standard game interface. Click on the … to open up the paytable and read the extensive game guide.

This Egyptian-themed adventure is similar to Thunderkick’s Beat the Beast: Kraken’s Lair slot. There are a few tweaks to the gameplay but the combination of sharp design and simple, volatile features are present and correct in Beat the Beast: Mighty Sphinx. It comes together very nicely on both desktop and handheld devices.

You’d think that slots players would tire of the ancient Egyptian theme. These virtual trips to the desert remain hugely popular though. With the high variance gameplay and classy design on offer from the likes of Beat the Beast: Mighty Sphinx, it’s easy to see why – and you can win 4,444 x your bet on each spin or free spin.

❓ What is the Beat the Beast: Mighty Sphinx RTP?

The RTP in Mighty Sphinx is 96.1% which puts it in the mid-range. Wins will come quite frequently but of a smaller nature – the bigger wins are not very often but can be huge when they do land.

🥇 What is the Beat the Beast: Mighty Sphinx variance?

This is a volatile game. The variance here is definitely in the high category. The key to success is unlocking the Bonus Game feature where the wild upgrades can deliver 4,444 x bet wins more easily.

🎰 What is the Beat the Beast: Mighty Sphinx max payout?

The maximum award in Mighty Sphinx is a non-too shabby 4,444 x your total bet. Even Pharaoh himself would be chuffed with that!

⚡ What bonus features does Beat the Beast: Mighty Sphinx have?

The main extra is the Bonus Game feature. Each retrigger also upgrades 1 of the medium value Egyptian hieroglyph symbols into a wild. There’s also a Mystery feature in the base game and free spins.