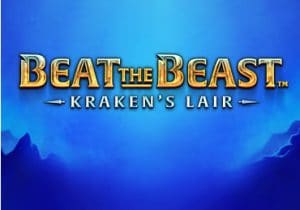 WHERE TO PLAY Beat the Beast: Kraken’s Lair SLOT

High class design and simple but potentially explosive gameplay combine rather nicely in Beat the Beat: Kraken’s Lair. It’s a 5 reel, 9 payline video slot from Thunderkick that comes with expanding symbols when a winning combination includes a wild. There’s also a free spins feature. Dive beneath the waves on your computer, tablet or mobile from 10p to £100 per spin.

Head to the seabed

The design flair we’ve come to expect from a Thunderkick slot is present and correct in Beat the Beast: Kraken’s Lair. The setting is the ocean floor which is littered with shipwrecks. On the reels are A to 10 royals alongside a trident, a pendant, a treasure chest and an idol of the kraken. The mighty sea monster is the top-paying symbol. It awards 1.5, 10, 50 or 500 times your bet if you land 2, 3, 4 or 5 in combination.

Land a winning combination that includes the kraken emblem wild to bring the Expanding Wild feature into play. One of the standard symbols in the winning line (but not the wild itself) will expand and fill the whole of the reel to offer up a potentially larger winning combination.

Free spins with kraken emblems on every one

The Bonus Game feature is triggered by landing 3, 4 or 5 of the kraken emblem symbol anywhere on the reels on the same spin. You’ll pocket an award of 2, 20 or 200 times your total bet before going on to play 10 free spins.

One kraken emblem wild scatter is added to a random position on the reels on each free spin to enhance your winning chances – this makes it easier to activate the Expanding Win feature basically.

If you land 3 or more emblems on the same spin you can look forward to another payout and another round of 10 free spins – in fact, there are no limits to how many free spins you can play with.

Thunderkick’s formula of top-notch sound and visuals and simple but volatile gameplay has been a successful one. It’s a case of ‘if it ain’t broke, don’t fix it’ with Beat the Beast: Kraken’s Lair. The crisp design is excellent and the straightforward features can pack a big punch.

This is a high variance game. The RTP stands at 96.12%. Easy on the eye and delivering straightforward, volatile gameplay it’s just what we’ve come to expect from Thunderkick. It also offers big potential wins with the max payout 7,777 x bet on each spin or free spin.

If you fancy heading out to the waters, Thunderkick also has the Riders of the Storm slot which has plenty of features and can pay up to 26,426 x bet on each free spin.