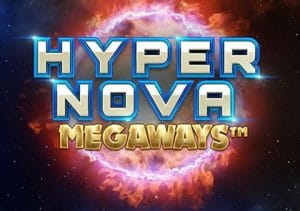 WHERE TO PLAY Hypernova MegaWays SLOT

Hypernova MegaWays is a 6 reel video slot with up to 117,649 ways to win from ReelPlay. Available to play from 40p to £60 a spin across all devices, this space themed game comes with Cascading Reels and a Jackpot Respins feature where you fill the reels with supernova scatters to win cash prizes and fixed jackpots up to 2,000 times your bet.

Visually, Hypernova MegaWays is set in outer space – with the burning sun in the backdrop, the reels are encased by neon lights. Symbols include standard A, K, Q, J, 10 and 9 card suits as well as 4 gemstones – you’ll see sapphires, jades, rubies and diamonds on the reels.

The diamond is the most rewarding symbol with 6 on a payline giving you 100 times your bet. There’s also a wild that replaces all symbols except the scatter and appears only on the top reel. Being a MegaWays slot, the number of symbols per reel can vary – at it’s maximum it can have up to 7 symbols per reel which can lead to the maximum 117,649 ways to win. At the very least, you’ll get 324 ways to win.

Hypernova MegaWays uses the Cascading Reels feature – when you get a win, the contributing symbols will disappear for new symbols to take the vacated spaces. This allows you to form winning combinations again and again.

When it comes to bonus features, it’s all about the supernova symbol which is the scatter – they have cash prizes on them. When you see 6 or more landing simultaneously on the reels, you’ll activate the Jackpot Respins feature. With 3 respins awarded, all the triggering supernova symbols remain in position.

If another new supernova scatter appears, it too will be held with the number of respins resetting to 3. The respins will end when you finish all your respins or you fill all positions with scatters. Each supernova scatter can contain a cash prize of up to 100 times your bet – they can also award 4 fixed jackpot prizes:

Hypernova MegaWays is not a conventional MegaWays video slot at all – it feels like the MegaWays game engine has been added to Starburst but without the expanding wilds. It’s a decent video slot though but other MegaWays games like Kingmaker from Big Time Gaming and NextGen Gaming’s Medusa MegaWays offer bigger potential and better bonus features.