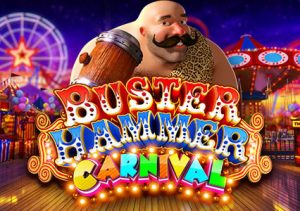 5 No Deposit Free Spins, 100% Bonus up to £100
+ 10% Cashback
VISIT CASINO
T&Cs Apply New customers only, min deposit £20, wagering 35x, max bet £5 with bonus funds. 5 Free Spins on registration (max withdrawal is £100). Max bonus is 100% up to £100. No max cash out on deposit offers. Welcome bonus excluded for players depositing with Skrill or Neteller. Cashback is cash with no restriction. Full T&C’s apply #ad

Roll up, roll up! ReelPlay’s circus strongman is back in Buster Hammer Carnival. The action here takes place on a 5×5 grid that offer’s 3,125 ways to win. With a whack of the hammer Buster can turn up to 5 positions on a reel wild. There’s also a bonus round that offers 10 free spins on an expanded reels set that offer 32,768 ways to win. Play this colourful video slot on your PC, tablet or mobile from between 50p and £12.50 per spin.

A circus big top is the setting for Buster Hammer Carnival. Joining the circus-style A to 9 royal values are carnival tickets, hot dogs and an archery target. Buster Hammer is the most rewarding symbol. Land 5 of the muscleman in combination and you’ll pocket an award of 12 times your bet.

Helping to create those winning combinations is the hammer which is the wild. This can hit on reel 3 only at standard stake levels of 50 coins. Up those stakes to 75 or 100 coins per spin and the hammers can land on reels 2 and 3 or reels 2, 3 and 4. This is called the Buster Bet feature.

If the wild forms part of a winning combination. the animated Buster to the side of the reel will spring into life via the Wild Striker feature. He’ll strike using the hammer and deliver extra wilds. You can land up to 5 of these new golden wilds on any reel that contains a wild. A new payout calculation is made when the new wilds are in place.

Buster Hammer Carnival also comes with a Mighty Free Spins feature which is triggered by landing 3, 4 or 5 scatters on the same spin. After receiving a payout of 2, 10 or 50 times your total bet, you’ll then go on to play 10 free spins.

The action here is slightly different to the base game. The reels are expanded so they are 8 high. This also increases the number of ways to win up to 32,768.

Buster and his mighty hammer are in play during the feature too. Instead of 5 extra wilds a single strike of the hammer could deliver up to 8 on each reel. You could get up to 24 wilds here which can give you payouts of 8,704 times your bet on every free spin.

This is an enjoyable second outing for the circus strongman. The sound and visuals are nicely done and the extra wilds come along often enough to keep things interesting. This is fairly volatile too as the variance is on the north side of medium.

If you enjoyed Buster Hammer’s first outing, Buster Hammer, then you’ll find more of the same in this encore performance.