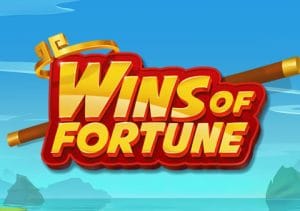 WHERE TO PLAY Wins of Fortune SLOT

Historical Asia is the setting for Wins of Fortune, a volatile release from Quickspin. Featuring the developer’s usual high-end design, this virtual trip east comes with re-spins, super re-spins with held symbols and an expanding reel set that can offer up to 259 ways to win. Play from between 20p and £100 per spin.

As we’ve come to expect from Quickspin titles, Wins of Fortune is a very stylish looking video slot – a coastal scene forms the backdrop to the reels which include 5 lower value gemstones and 4 higher value character symbols. The most lucrative symbols are the hat-wearing courtier and the red-haired warrior. Land 5 of these in combination and you’ll pocket a payout equal to double your total bet. There’s also a wild that substitutes for all other symbols.

The game engine in Wins of Fortune is a little unusual – to start, you’ll spin with the reels set up in a 3x3x4x4x5 configuration which gives 76 ways to win. Winners are created by landing the same symbol on adjacent reels rather than paylines.

Following a winning spin, you’ll trigger the Wins of Fortune Respin feature where you are awarded a re-spin. This re-spin takes place on an expanded reel set and the original winning symbols move 1 reel to the left. On the first re-spin, you’ll have 90 ways to win. This expands to 154, 164 and 259 ways to win with each subsequent re-spin.

If you get on a roll and manage to hit 4 re-spins in a row, you’ll trigger the Super Respin feature. These are played out on the 259 ways to win machine. The successful symbols from the triggering spin are locked in place. If a new symbol joins the cluster, a new payout is made and another re-spin follows. These keep on coming as long as a new winner is created.

It may lack a traditional free spins round, or any other extras for that matter, but we found no shortage of action in Wins of Fortune. The re-spins come along regularly and keep the pace high. This is a pretty feisty video slot too as the variance here is in the medium to high range (8/10) so you can expect some lengthy down spells. Trigger the Super Respin feature though and get on a roll there and the wins can quickly build – up to 2,757 times your stake on each spin!

Quickspin has delivered the goods once again with Wins of Fortune. The sound and visuals are top notch and there’s plenty of action on offer as far as gameplay is concerned. The range of features isn’t extensive but the regular re-spins hit the mark. If you’re a fan of the Chinese genre, and let’s face it, there are plenty of you out there, Wins of Fortune is one to add to the rotation.