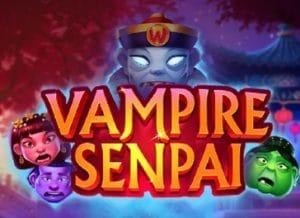 WHERE TO PLAY Vampire Senpai SLOT

Mysterious Chinese folklore undead creatures take centre stage in the rather creepy Vampire Senpai slot. Created by Quickspin, it’s a 5 reel, 40 payline game that comes with some unusual wild extras. In our Vampire Senpai review, you’ll find out about Vampire Wilds that convert any surrounding mid-value symbols into wilds. Lookout for between 3 and 9 Talisman wilds that can randomly appear on reels 1 through 4 on any base game spin. Trigger the bonus round and you’ll play free spins complete with sticky and floating wilds. Let’s see what the Jiangshi have in store.

The action in the Vampire Senpai slot game plays out on a 5×5 reel grid which offers 40 paylines. A win is created by landing matching symbols on adjacent reels starting from reel 1.

You can play at stake levels that start at 10p, rising to a maximum of £100 per spin.  There are plenty of options when it comes to autoplay. You can set up to 1,000 auto spins. Click on the advanced tab in autoplay to set win and loss limits.

The RTP is 96.19% which is about average. The Vampire Senpai volatility is on the high side of medium. It’s not stratospheric but the 7/10 variance means that these vampires can still offer plenty of bite.

The maximum potential payout is 8,894.3 x your total bet which is high. This can be won on each spin or free spin but your chances increase in the latter.

Wilds and plenty of them feature heavily in Vampire Senpai, both in the base game and the bonus round. They can gobble up neighbouring symbols as well as turn sticky during the feature.

This feature is triggered by landing a vampire wild symbol adjacent to one of the 3 medium value human symbols. This can be up, down, left or right. The vampire wild takes a bite at the human next door and turns that symbol into a wild. If there is a human symbol next to a symbol that has turned wild, it too becomes a wild. A payout consideration is made with all the wilds in position.

These wilds don’t usually appear in the base game. The Talisman Mystery Wilds feature can trigger at random on any base game spin though. This adds a random selection of between 3 and 9 wilds onto reels, 1, 2, 3 and 4. A payout calculation follows with the wilds in place.

Land 3, 4 or 5 bonus bell symbols anywhere on the same spin and you’ll trigger the main feature. Your reward is 7, 9 or 12 free spins with some pretty wild extras.

Each time a vampire wild lands, it does its usual nibbling and turns adjoining symbols wild. Once one hits, it hops to a new symbol position on each free spin that follows.

If you’re lucky enough to land a talisman wild, it turns sticky, locking in position for the rest of the free spins round. Every vampire and talisman wild that land also add 1 extra free spin to your total. Quickspin are one of our favourite developers when it comes to design and they haven’t let us down with Vampire Senpai which looks and sounds terrific. The game based Jiangshi undead creatures from Chinese folklore who feast on humans and eat up their life force.

There’s a real elegance to the imagery which is superbly drawn and packed full of detail. It’s lovely and sharp too, making everything really easy to follow at a glance. It does have a comedic feel though.

The reels are set within a red, pagoda building. The symbols appear on stone-style blocks. You’ll see lower value A to J symbols plus the 3 human faces. These 3 character symbols all pay 1, 2.5 or 10 x your total bet if you land 3, 4 or 5 on a payline.

Even more rewarding is the wild which pays up to 20 x bet per payline in the base game. In the free spins round, this rises to 40 x your bet for a 5-in-a-line combo.

The same high design aesthetic is evident in the soundtrack. The understated Asian score has a very traditional feel and matches the visuals perfectly. A big thumbs up for the audio and design features in Vampire Senpai.

You’ll find the same design flair in the Vampire Senpai mobile slot. Just like the desktop version, it looks and sounds excellent. The gameplay is perfectly fine on a smaller screen device too. It all comes together very nicely.

China and horror are 2 of the most popular themes in the online slots world. Quickspin has mashed them up very successfully in Vampire Senpai. The design here is first-class. That’s matched by the gameplay that is both innovative and entertaining.

The wild extras provide plenty of variety and can really come into their own during the Reanimated Free Spins Bonus feature. Add in the potential for wins of 8,894.3 x your total bet and you have a unique proposition.

A blood-sucking Chinese zombie creature doesn’t sound like ideal inspiration for an online slot. It works really well here though. If you like the Asian or horror theme or you just fancy playing a well-designed slot with some interesting extras, Vampire Senpai is well worth investigating.

If it’s vampires you thirst for, there are not many better than Microgaming’s Immortal Romance slot which is 1 of the most popular games ever.

❓ What is the Vampire Senpai slot RTP?

The Vampire Senpai return to player rate is 96.19%. Being a medium to high variance slot, most wins will be small. The key to winning big is from the various wilds on offer in the base game and free spins.

🥇 What is the Vampire Senpai max win?

The Vampire Senpai slot can pay out up to 8,849.3 x your total bet. Whilst this can be won in the base game, you have a better chance in the free spins feature as vampire wilds hop around and Talisman wilds are sticky.

🎰 Can you play Vampire Senpai on a mobile or tablet?

Yes, there’s a Vampire Senpai mobile slot which can also be played on tablets. You can expect Quickspin’s usual design flair on the small screen version as well as all the innovative wild extras found in the desktop version of the slot.

⚡ Are there any Vampire Senpai bonus features?

Yes, there are 3 bonus features. On any spin, you could see between 3 and 9 wilds added. There’s also a free spins round. Wilds here turn sticky or hop around to new positions with each free spin after they have hit. Each wild also adds 1 extra free spin to your total.