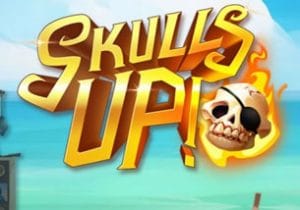 WHERE TO PLAY Skulls UP! SLOT

Enjoy some swashbuckling adventure on the high seas in Skulls UP! an unusual pirate-themed slot from Quickspin. The base action uses a standard 5 reel, 243 ways to win machine. Special wilds deliver re-spins which open up locked positions. Open all 9 extra positions and you’ll have 1,944 ways to win. Three treasure chests trigger more re-spins where unlocked positions remain open throughout the round. Play this high variance game from 10p to £100 per spin.

Quickspin games usually have a glossy, colourful, almost 3D look and that’s the case with the Skulls UP! slot – the wooden reels are set against a backdrop of a sandy beach, blue seas and palm trees. There you’ll find A to 10 royals as well as the members of the motley pirate crew.

They include a parrot called Biscuit and a monkey called Wrench. They’re joined by shipmates Smelly and Biggie and the female captain who goes by the name of No-Beard. She’s the most rewarding symbol, paying 2, 4 or 20 times your bet if you land 3, 4 or 5 in combination.

The game features 2 wilds. There’s the standard skull wild which replaces all the standard symbols. More interesting is the flaming skull wild. This performs the usual substituting functions but also activates the Skulls UU! Re-Spin feature.

Atop the main reels is a set of sails which features 9 locked positions. Land a flaming skull wild and 1 of the locked positions on the sail opens up and a re-spin follows. Each extra position that’s in play also boosts the number of ways to win.

The re-spins keep on coming if a skull or flaming skull wild are on the reels. It’s possible to play on reels that offer 1,944 ways to win rather than the standard 243 if you open up all the locked positions.

Land the treasure chest scatter on reels 2, 3 and 4 on the same spin to activate the Flaming Free Spins feature. On offer here are 6 free spins. The flaming wilds can trigger the Skulls UP! re-spins in this round. The wrinkle is that any position that is opened will remain available for any free spins you have left – this means the number of ways to win can only increase.

Land a standard skull wild and it expands the reels, even is the wild skulls aren’t active. If you fill a reel to its maximum height, you’ll receive 2 extra free spins. That means you could end up with 6 extra free spins and 12 in total.

We’ve lost count of the number of pirate-themed slots we’ve played. Let’s just say that players have plenty to choose from. With its unusual combination of re-spins, free spins, wild extras and expanding reels, Skulls UP! offers something rather different.