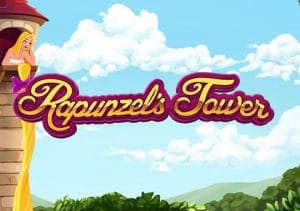 WHERE TO PLAY Rapunzel’s Tower SLOT

Based on the classic German folk tale from the Brothers Grimm, Rapunzel’s Tower is a 5 reel, 20 payline video slot from Quickspin. Highlights include special wilds that lock in place until you land a winner and a free spins round that awards free spins with a potential 2x multiplier. Play on all devices from between 20p and £100 per spin.

Quickspin video slots usually impress visually and Rapunzel’s Tower is another feast for the senses. With Rapunzel in her tower, complete with flowing blonde locks, to the side you’ll see mediaeval style playing cards spinning around the reels. They’re joined by a prince, queen and king and of course the wicked witch Dame Gothel who wants to snip Rapunzel’s hair.

Rapunzel’s hair is the wild – it replaces all other symbols apart from the scatter. Land 3 or more wilds and you’ll trigger the Respin Wild Symbols Stick Until You Win feature. Respins are awarded with the wild locked in place. These continue until you land a winner.

The other extra on offer in Rapunzel’s Tower is the Free Spins feature which is triggered by landing 3 scatter symbols on the same spin. You’ll then be awarded 10 free spins. Every time you land a bonus wild, the prince will climb 1 step up Rapunzel’s Tower.

As far as volatility goes, Rapunzel’s Tower sits in the medium to high range. The best potential action comes via the free spins round. If you manage to get the prince to the top of the tower the doubling multiplier can quickly get the coins flowing.

As usual from Quickspin, the design here is terrific. The cartoon royal family and of course Rapunzel are superbly drawn and wouldn’t look out of place in a video game let alone a video slot. No complaints here.  The features, though limited in number aren’t bad either.

The fairy tale theme isn’t one of our favourites. This is certainly one of the better examples of that genre though, combining high spec visuals and some tidy features to impressive effect. If you do enjoy this theme, then Rapunzel’s Tower is well worth a spin as it offers you wins of up to 1,619 times your total bet on each spin. If you like the theme, Frogs Fairy Tale by Novomatic is recommended.